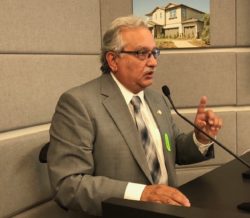 All Hope Dries Up

Again, it came down to fish, specifically Chinook salmon, that forced the proposed Temperance Flat Dam out of the race for Proposition 1 funding for building new water storage projects.

For more than 20 years, the Temperance Flat Dam proposal was passionately advocated with unwavering support by Central Valley cities and the San Joaquin Valley Infrastructure Authority (SJVIA) who were behind the application. Temperance Flat came crumbling down Wednesday at the California Water Commission (CWC) meeting in Sacramento on the second day of discussion.

On Tuesday, CWC staff members assigned to crunch the Public Benefit Ratios for the project were solidly encased in concrete, refusing to grant the project any consideration for its ecosystem restoration benefits. The Dam would provide critical cold water to flow down the San Joaquin River, thus helping the salmon spawn.

And while the official public benefit calculation came up short today, proponents already saw that the project was already on life support Tuesday, with a dire prognosis.

“Stunned is an understatement,” said Mario Santoyo, executive director of the SJVIA, who has worked for more than 18 years on the project. “Temperance Flat is the most critical water project ever proposed for the Central Valley, which is ground zero for significant water shortages that will not go away.”

It all boiled down to the Ecosystem Diagnosis and Treatment (EDT) model that was approved by Bureau of Reclamation and the California Department of Water Resources. Despite both approvals, that model did not jive with the Commission staff’s model, which undervalued the project’s public benefit ratio, killing the opportunity for Temperance Flat Dam to receive funding of more $1 billion for construction.

“We are working in an area of great uncertainty in professional judgment,” Bill Swanson, vice president, Water Resources Planning & Management for Stantec, a global planning and engineering firm, who presented data for the SJVIA. “We do not have fish in the river. We do not have empirical data. The only issue available to us is a comparison of how the system would respond to changes in flow, temperature and habitat,” Swanson said.

“That’s the reason we used the EDT model, the same model that the Bureau of Reclamation has used in their models of flow,” Swanson explained. “The SJVIA’s challenge was how to take the results of that model and analyze them to a level of detail that distinguishes the precision that we might want to have around the results,” said Swanson.

“I’m very disappointed with the way they scored a great project that needed to be built,” noted Santoyo. “And I am not happy about one commissioner from Orange Cove who stabbed us in the back and scolded us on why we did not meet the Public Benefit Ratio. We did meet and exceed that ratio, but the CWC disagreed with our ecosystem restoration model that had been used by both the state and the feds.”

Several Water Commissioners publicly wrangled with their staff on how they could make the project work. They sought areas to increase the project’s cost-benefit evaluation to get it funded.

Commissioner Joe Del Bosque read the ballot text of Prop 1, approved by California voters by 67 percent in 2014. He reminded those present that voters expected a water storage project to be built, adding, “We need to find more certainty in order to get Temperance Flat built.”

Commissioner Daniel Curtain distinguished two parts to the discussion—physical and monetary. “Take a look and see if there is a physical benefit for ecosystem restoration. Finding a potential benefit and attaching a potential monetary benefit could be helpful,” he said.

The project was also short on points for recreation opportunities on what would be a new lake behind the 600-foot high dam east of Fresno, behind Friant Dam. Commissioner Joseph Byrne said he hoped for more thought given to the recreation cost benefit. “Intuitively, zero benefit does not make sense. We need a higher level of confidence in the estimated recreation cost-benefit,” he said.

CWC staff stipulated that while the newly created lake behind Temperance Flat Dam would accommodate boating activity, the lack of camping, hiking, and other activities within the existing San Joaquin River Gorge neutralized any recreation benefits.

Santoyo said the SJVWIA spent more than $2 million on the California Water Commission application, utilizing what he said were the most qualified engineers to develop the technical data required by Commission staff. The U.S. Bureau of Reclamation, which administers California’s Central Valley Project for the U.S. Department of the Interior, has invested more than $38 million in studying the project. Santoyo said those studies supported the finding that the selected Temperance Flat site is the most preferred location for such a crucial project.