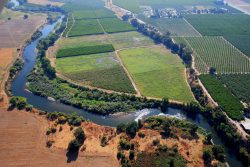 California Ag Today conducted an extensive interview with Les Grober, assistant deputy director, State Water Resources Control Board (SWRCB, Water Board) Division of Water Rights, regarding the Water Board’s proposal to adjust the flow objectives on the San Joaquin River to protect fish and wildlife. The plan, specifically, is to divert 40 percent of water flows from the Stanislaus, Tuolumne and Merced Rivers that flow into the lower San Joaquin River.

Hearing on the Potential Changes to the Water Quality Control Plan for the San Francisco Bay-Sacramento/San Joaquin Delta Estuary: San Joaquin River Flows and Southern Delta Water Quality and on the Adequacy of the Supporting Recirculated Draft Substitute Environmental Document.

Hearing begins at 9:00 a.m. on the following dates:

California Ag Today: At a recent public workshop in Sacramento, Les Grober, you cited some statistics that show the Water Board really has not done a lot—or much of anything particularly—in the San Joaquin River in terms of helping salmon. Is this accurate?

Grober: Yes. I did not discuss specifically the flow benefits or the fish benefits, but I did explain there are times between February and June when flows are critical for salmon. During the months of March and April, especially, less than 10 percent of the water flows than would be there normally if you were not storing it or diverting it.

California Ag Today: So the Water Board proposes taking 40 percent from the rivers to help the salmon?

Grober: I posed the question, “If there is a species that has adapted to 100 percent flow, how likely would it be that it could be successful with less than 10 percent of that?” If you look at the overall statistics between 1984 and 2009 for the three tributaries (Stanislaus, Tuolumne and Merced Rivers), the average flow during the February through June period was 40 percent on the Stanislaus, 21 percent on the Tuolumne, and 26 percent on the Merced.

California Ag Today: So you need water from all three tributaries to accomplish the objective?

California Ag Today: So the Water Board is not trying to protect the salmon at any cost, which is the mandate from the Endangered Species Act?

California Ag Today: The Water Board earlier proposed the need for 60 percent to be unimpaired flows?

Grober: The science developed over the years has shown that if you were not going to consider any other uses of water, like agriculture, drinking water or anything else, the number you would need is 60 percent of unimpaired flow.

California Ag Today: Due to agriculture pushback, the new goal is 40 percent?

Grober: That is why what we are doing now is very hard. We’re doing the balancing that says we have the science that shows the need for increased flows. We have all the information that shows how important the current uses of water are now for agriculture and municipal supply and hydropower. so how do you come up with a balance that takes into account all of that information?

California Ag Today: We have been following closely the extraordinarily increased flows through the Delta and to the Pacific Ocean, which seemed to be No. 1, a total waste of freshwater, and No. 2, at least a few acre-feet could have been pumped into the San Luis Reservoir for cities and farmers.

Grober: It would be interesting to see the numbers that you are citing because, during this recent drought, in particular, there have been greatly reduced flows throughout the system—not in any way—by any stretch—increased flows. In fact, the Water Board approved emergency change petitions not to increase flows, but to do just the opposite.

In general, they have relaxed or shifted downward required flows so there would be more water available to be smartly used for multiple purposes, not just for fish and wildlife, but also to get more water for public interest uses.

California Ag Today: We know that flood control pulse flows are difficult to capture, but it seems that some of that great volume of water could be pumped southward.

This is not to say that there are no constraints, at times, on what can be diverted or exported to protect fish and wildlife due to objectives, the State Boards, the Water Quality Control Plan, or biological opinions. But much of that water that people look at and say, ‘Why is that all going out?’ — a lot of that is flood flows that cannot be captured. So it ends up looking like a very big number, but it is not a number that can be captured because, as you can imagine during wet years and high flow times, it is almost too much. People can’t capture it.

California Ag Today: So there is not even an effort to export that water to those who need it — farmers and communities?

Grober: Like I said, there have been constraints on export pumping. But those constraints are intended to provide some protections for fish and wildlife, while at the same time they are opportunities for getting water for other uses. So I see a lot of overstatements.

California Ag Today:  Again, when there are pulse flows, why can’t we collect them and exported them? Why can’t we just turn up the pumps to capture some of the extra water moving through the Delta to export it to farms and cities?

Grober: There are constraints on what are called reverse flows in Old and Middle Rivers (OMR), which is a critical area of Smelt risk. This is part of the biological opinions intended to protect smelt and salmon at critical times that happen to coincide occasionally with higher flow events.

California Ag Today: You talk about striking a balance. It seems that the environmental side gets nearly 100 percent of what they need and Ag gets nearly zero.

Grober: Where is Ag getting zero?

California A Today: There are Federal Districts on Fresno County’s Westside that for several years have received zero water allocation. This past season, they were promised 5 percent, but they were not able to get the entire amount.

Grober: If I may, it is clear that you have a certain view on this.

California Ag Today: Absolutely. It just does not seem that agriculture has a seat at the table.

We’ll continue Part Two of this series tomorrow. We’ll discuss, among other things, that if the proposal goes through, farmers would be forced to use more groundwater.