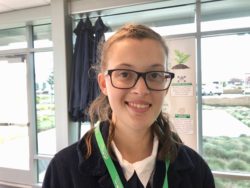 It’s a very interesting concept, garlic eggs. Flavoring freshly-laid eggs with garlic. How to do it is very simple, according to Anna Kelly with the West Sacramento FFA at River City High School, who is working with a Blue Ameraucana chicken. She had the idea of replicating what your grandparents may have done. They just fed their laying hens some garlic.

And low and behold, the eggs started tasting as if they were seasoned with garlic.

Kelly got the idea of feeding her chicken garlic as a research project.

“I took one garlic clove, and I fed it to my chicken, whose name is Monster, and she loved it,” said Kelly. “And every time when I gave her daily garlic, she would meet me up at her bedding, and it was so cute.”

She found that her chicken wanted the garlic, and sure enough, the eggs had a garlic taste. She asked her culinary arts teacher, Cheryle Sutton to see if she could cook one of her chicken’s garlic eggs. The teacher said okay.

“I cut it up, and I asked several of my teachers to try it,” Kelly said. “And it was amazing; the teachers said it tasted like an actual garlic egg. No salt and pepper, no other additional seasonings.”

“What I’m hoping is to grow my project more. I am incubating more chickens, and I’m going to put them on the same diet. I want to test different varieties of chickens to see which one’s eggs taste more like garlic eggs,” Kelly explained.

Eventually, she may grow the project into a wholesale operation supplying grocery stores with garlic-tasting eggs.

To hear a podcast with Anna Kelly on her garlic eggs experiment, click here.

The U.S. Department of Agriculture’s (USDA) Food Safety and Inspection Service (FSIS) proposed new federal standards to reduce Salmonella and Campylobacter in ground chicken and turkey products as well as raw chicken breasts, legs and wings. Development of these new standards is a major step in FSIS’ Salmonella Action Plan, launched in December 2013 to reduce Salmonella illnesses from meat and poultry products.

“Today, we are taking specific aim at making the poultry items that Americans most often purchase safer to eat,” said Agriculture Secretary Tom Vilsack. “This is a meaningful, targeted step that could prevent tens of thousands of illnesses each year.”

“These new standards, as well as improved testing patterns, will have a major impact on public health,” said USDA Deputy Under Secretary for Food Safety Al Almanza. “The proposed changes are another way we’re working to meet the ever-changing food safety landscape and better protect Americans from foodborne illness.”

“Getting more germs out of the chicken and turkey we eat is an important step in protecting people from foodborne illness,” said Robert V. Tauxe, MD, deputy director of the Division of Foodborne, Waterborne and Environmental Diseases at the Centers for Disease Control and Prevention. “I look forward to seeing fewer Americans get sick as a result of these proposed changes.”

A pathogen reduction performance standard is the measure that FSIS uses to assess the food safety performance of facilities that prepare meat and poultry products. By making the standards for ground poultry tougher to meet, ground poultry products nationwide will have less contamination and therefore result in fewer foodborne illnesses. FSIS implemented performance standards for whole chickens in 1996 but has since learned that Salmonella levels increase as chicken is further processed into parts. Poultry parts like breasts, wings and others represent 80 percent of the chicken available for Americans to purchase. By creating a standard for chicken parts, and by performing regulatory testing at a point closer to the final product, FSIS can greatly reduce consumer exposure to Salmonella and Campylobacter.

FSIS’ science-based risk assessment estimates that implementation of these standards would lead to an average of 50,000 prevented illnesses annually. FSIS intends to evaluate comments for 60 days and announce final standards and an implementation date this spring. The federal register notice is available on FSIS’ website at  http://www.fsis.usda.gov/wps/portal/fsis/topics/regulations/federal-register/federal-register-notices.

FSIS plans to use routine sampling throughout the year rather than infrequently sampling on consecutive days to assess whether establishments’ processes are effectively addressing Salmonella and, where applicable, Campylobacter on poultry carcasses and other products derived from these carcasses.

Russia’s threatened ban on U.S. poultry imports, the latest move in a sanctions skirmish over Moscow’s support of rebels in Ukraine, has agriculture companies alert to the risks of a conflict that’s already roiled trading of crops ranging from soy, beef and fruit to California pistachios.

Moscow has struck back against trade sanctions following the downing of a Malaysian jetliner last month by imposing food restrictions, and would add U.S. chickens to Ukrainian soy and other products Russia has blocked since it seized Crimea earlier this year: Australian beef, Latvian and Lithuanian pork, Moldovan fruit and Ukrainian juice.

Russia’s move to limit agricultural trade is seen as a sign the conflict with Washington is heating up. Russia imported about $1.3 billion in U.S. food and agricultural products last year, or about 11 percent of all U.S. exports to the country, according to U.S. Census data.

Pistachio exporters have “a legitimate fear” about the potential for trade disruptions, Vlazakis said.

Russians may turn for pistachios to Iran, the world’s second largest producer after the United States.

An armed group last month occupied a Cargill sunflower-seed crushing plant in eastern Ukraine, a region supportive of the Putin government, and commodity trader Glencore is expected to have a hard time selling grain silos in the country.

Last week, the farm sector’s attention turned to poultry after Russia’s Federal Veterinary and Phytosanitary Inspection Service said it found signs of the antibiotic tracycline in four shipments of U.S. poultry. The service could not be reached for comment.

U.S. poultry exporters and producers said there were no problems with the meat. For some, the situation was hardly their first time dealing with trade troubles with Russia.

Russia has repeatedly been accused by the West of using food safety concerns and its veterinary service as instruments to ban supplies from countries with which it has strained relations or to protect its own industry. Explicitly banning a country’s products for political reasons would violate World Trade Organization rules.

Trade restrictions in prior years have caused some companies to back away from deals with Russian importers, said Jim Sumner, president of the USA Poultry & Egg Export Council.

The council has advised poultry companies to keep in contact with Russian importers so they will get early warnings should Moscow impose a ban.

For Russian President Vladimir Putin, targeting agricultural imports could be a low-cost way to retaliate against U.S. sanctions over Ukraine.

Other threats, especially any involving Russia’s export of oil and gas shipments, likely would bring additional sanctions on Moscow, said Robert Kahn, a senior fellow for international economics at the Council on Foreign Relations.

Russian sanctions on farm products would be “quite painful” for the companies affected, although the macroeconomic effects on the U.S. economy would be small, he added. 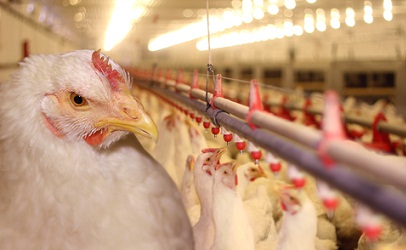 The Memorial Day weekend usually kicks off the summer grilling season, and Bill Mattos, president of the California Poultry Federation, said he expects shoppers will look more to chicken and other poultry products this year as less expensive protein alternatives to beef and pork.

“The barbecue season is a big time for chicken,” he said. “We think prices will probably go up for chicken, but not at all like we’re seeing in beef and pork.”

With the U.S. cattle herd at its lowest in more than 60 years—made worse in recent years by drought-related downsizing—and the porcine epidemic diarrhea virus lowering U.S. pork production, market analysts say poultry meats are poised to fill that market gap.

The bright outlook for poultry producers is expected to continue into 2015, as U.S. beef production is forecast to drop by nearly 6 percent this year, while pork production will also fall by as much as 7 percent, according to the Rabobank Food and Agribusiness Research and Advisory division.

William Sawyer, an analyst with Rabobank, said although overall U.S. meat consumption has declined in recent years—even before the recession—chicken consumption has stayed relatively stable and is now growing.

“That’s been largely driven by the fact that beef prices have risen significantly more than chicken has,” he said.

With the price of ground beef eclipsing that of chicken breast, Sawyer noted that fast-food restaurants such as McDonald’s are taking advantage of poultry’s lower price points by offering more new menu items featuring chicken.

Given how expensive it is to raise cattle compared to chicken in terms of feed cost, Sawyer said he expects chicken will continue to gain market share.

“Once consumers have the appetite for value, which is what we’ve seen in the growth in the chicken sector, it’s unlikely that beef is going to regain that per-capita consumption that it’s lost in the last seven or eight years,” he added.

Sawyer said consumers who buy specialty products such as organic, free-range or antibiotic-free are much less sensitive to price changes anyway, so producers who raise birds for these markets are not as impacted by current price trends in the conventional market.

Although USDA projects U.S. pork production will bounce back from the PED virus next year with a growth of 2.9 percent, beef production is expected to continue to decline, as ranchers retain their heifers in an effort to expand their herds.

In addition, U.S. chicken exports, which take up 20 percent of total production, are expected to continue to grow, particularly to Mexico, and that will also help to support higher chicken prices, Sawyer said.

“So the outlook is very positive and very profitable,” he added.