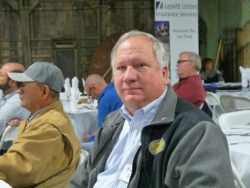 California Ag Today recently spoke with Ken Freeze, the outreach and education director for PD/GWSS. He told us about two major methods of control and prevention that the board is funding.

“There’s the area-wide control program, which does everything it possibly can to pretty much keep the glassy-winged sharpshooter confined to basically the southern part of the state,” Freeze said.

“We’ve got UC Davis Genetics Professor Andy Walker working on Pierce’s Disease resistant grapevine before the program, and he just released some of those vines to the UC Davis Foundation Plants Services.”

Freeze said this development has been done through traditional breeding, with the assistance of some new technology.

Walker’s traditional breeding is sped up by a lot of high tech tools. Previously growers would crossbreed, however they’d have to infect the vine and see if it got Pierce’s Disease.

“That could take a year or two. Now they know the genetic markers, so when the plant has only two or three leaves on it, researchers pull a leaf, do a DNA track on it, and look for that marker,” Freeze explained.  “Depending on the marker, the vine either goes to the next step in breeding or it ends up in the trash heap. So that has just sped up that process incredibly.” 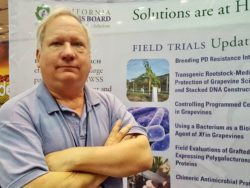 The glassy-winged sharpshooter vectors Pierce’s Disease, which has been devastating grape growers in California for the last few years. California Ag Today recently spoke with Ken Freeze, the Outreach and Education Director for the Pierce’s Disease/Glassy-Winged Sharpshooter Board, a program that uses winegrower’s assessments to fund research. He spoke with us about research that’s been carried out to hopefully find a cure for Pierce’s Disease.

“Andy Walker, with the Department of Viticulture and Enology, UC Davis, has been working on Pierce’s Disease-resistant grapevines. We just released some of those vines to the Foundation Plant Services at UC Davis,” Freeze said. “There are 14 more that are in the wings about ready to go. Some nurseries will be able to get that pretty soon, but already there are about 4,000 of his vines planted. Some of them have been planted in Georgia and Texas, which are real hotspot for the glassy-winged sharpshooter and Pierce’s Disease.”

“Here in California, 2,000 vines were planted in Napa Valley right along the Napa River. Those vines are doing great,” Freeze said.

“We’ve got another project. University of Florida plant pathologist Dr. Don Hopkins has found a benign stain of Pierce’s Disease. It’s like inoculating a vine with a smallpox vaccination. That’s actually a company that’s working on commercializing that now,” Freeze explained.

“We’ve got another project that involves a modified root stalk that sends either a protein or a molecule up into the vine – a non-modified scion – five different ways that stops the Xylella fastidiosa bacteria literally in its tracks before it can cause Pierce’s Disease in the vine. That’s just a small sample of some of the really good projects.”

“One grower told me: ‘It’s not the end of the tunnel, but we can see it,’” Freeze said.