There Was a Big Decline of Hazardous Material Used in 2017

The amount of pesticides used statewide declined in 2017 according to new data from the California Department of Pesticide Regulation.  This includes a drop in many of the most hazardous chemicals, including pesticides that are carcinogens, and those with the potential to contaminate groundwater and air.

According to the 2017 Pesticide Use Report, the overall amount of pesticides used in California dropped to about 205 million pounds in 2017. That was a decrease of 2 percent from the previous year.  Agriculture use, which accounts for the greatest pesticide use in California, dropped by 3.7 million pounds (1.9 percent) from 2016. Pesticide use in other applications, including landscaping and structural pest control, also decreased in 2017.

“This report demonstrates that California’s farmers continue to lead the way when it comes to using more sustainable pest management tools and techniques,”said Val Dolcini, Acting Director of DPR. “DPR looks forward to continuing its collaboration with growers, community groups, and other interested citizens to ensure that these pesticides are used in the safest manner possible. “

California produces nearly half of American grown fruits and vegetables, and the amount of pesticides used varies annually depending upon pest problems, weather and other factors.

You can see a short video at https://youtu.be/QKgExqdRpNM

Other highlights of the 2017 Pesticide Use Report data include:

The pesticide-use data, which has become more comprehensive in the decades since such information started being collected in the 1950s, helps support DPR in its regulatory and enforcement mission.  It can be viewed online: http://www.cdpr.ca.gov/docs/pur/purmain.htm. 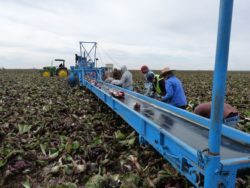 Once again, tests showed that the vast majority of fresh produce collected by the California Department of Pesticide Regulation (DPR) met national pesticide residue standards. During its 2017 survey, DPR found 96 percent of all samples had no detectable pesticide residues or were below levels allowed by the U.S. EPA.

“DPR carries out an extensive sampling of pesticides on fresh produce, and once again it shows that California consumers can be confident about eating fresh fruits and vegetables,” said Brian Leahy, Director of DPR. “California growers and farmers are adept at following our comprehensive rules to ensure produce is grown to the highest pesticide standards.”

The 2017 report is based on a year-round collection of 3,695 samples of produce from 28 different countries, including those labeled as “organic.” DPR scientists sampled produce from various grocery stores, farmers’ markets, food distribution centers, and other outlets throughout California. The produce is tested for more than 400 types of pesticides using state-of-the-art equipment operated by the California Department of Food and Agriculture.

The U.S. Environmental Protection Agency (U.S. EPA) sets levels for the maximum amounts of pesticide residue that can be present on fruits and vegetables, called a “tolerance.” It is a violation if any residue exceeds the tolerance for the specific fruit or vegetable, or if a pesticide is detected for which no tolerance has been established.

More than a third of the country’s fruits and vegetables are grown in California, according to the California Department of Food and Agriculture (CDFA). In 2017 DPR found:

-About 25 percent of all produce samples tested were labeled as Californian-grown,

-About 95 percent of these samples had no residues on them or were within the legal levels,

-About 5 percent of California samples had illegal residues, including kale and snow peas. These are pesticide residues in excess of the established tolerance or had illegal traces of pesticides that were not approved for that commodity. However, none of those residues were at a level that would pose a health risk to consumers.

Other highlights from the 2017 report include:

-41 percent of all produce samples had no detectable residues at all,

-55 percent had residues detected within the legal level.

-4 percent of all the samples had pesticide residues in excess of the established tolerance or had illegal traces of pesticides that were not approved for that commodity. 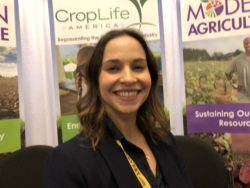 Sarah Macedo is the communications manager for CropLife America, a trade association that assists and advocates for their members, based in Washington D.C. They are the manufacturers, formulators, and distributors that manufacture organic and non-organic pesticides,

Macedo explained the #GiveACrop campaign, which puts a positive message for the need for crop protection products in agriculture.

“Go to GiveACrop.org, take a look at those memes along with myths and facts. We just want to talk about things in a realistic person-to-person way and not get too into this science, but just kind of talk about why pesticides are necessary,” Macedo said.

“Regarding the Give a Crop videos, we have heard from both farmer friends, adversaries, and consumers. We had a lot of the FFA kids who absolutely love them, which is great since that is our target audience; we do know that they are sharing that with their friends who are in the on-ag space,” she noted.

“We don’t have a lot of money behind it, so we have been promoting it on social media, and we’ve gotten great pickup even from folks who normally aren’t the friendliest in the ag space. They’ll watch one, and they’ll have posted and saying, ‘we may not necessarily agree, but these are funny and to the point,’” Macedo explained

Again, Crop Life America is a trade association representing the manufacturers, formulators, and distributors of organic and non-organic pesticides.

“We include government affairs, science and regulatory communications experts, and those from the legal profession who help our members, and our members And we advocate on their behalf to make sure that no regulations are going unchecked, that everything is based on sound science and getting the information out about the benefits of pesticides and why they’re used and about American farming in general,” Macedo said.

With regulations on resistant management products getting increasingly strict, it is important that farmers keep all of their tools in their toolbox. That is where Gowan, a family-owned crop protection company, comes in. Cindy Smith, agricultural relations director, has a proven track record of dedication to the business.

“When you work for a small family-owned business like Gowan, you have the opportunity to do many things,” said Smith, who has been involved in various positions from regulatory to commercial. She is now focused on policy, and how it not only impacts growers but ultimately consumers.

Since its beginnings in Arizona and California, the company has grown internationally to form partnerships with Japanese companies. Despite their exponential growth, their services remain grounded.

California agriculture is critical to their business, and the team is dedicated to upholding California’s status as an elite producer of agricultural goods—despite the threat of overregulation.

“Today marks an important milestone for the farm workers who plant, tend, and harvest the food that we put on our tables each day,” said Gina McCarthy, EPA Administrator. “EPA’s revised Worker Protection Standard will afford farm workers similar health protections to those already enjoyed by workers in other jobs. Protecting our nation’s farm workers from pesticide exposure is at the core of EPA’s work to ensure environmental justice.”

EPA is proposing significant improvements to worker training regarding the safe usage of pesticides, including how to prevent and effectively treat pesticide exposure. Increased training and signage will inform farm workers about the protections they are afforded under the law and will help them protect themselves and their families from pesticide exposure.

Workers and others near treated fields will now be protected from pesticide overspray and fumes. In addition, EPA has proposed that children under 16 be legally barred from handling all pesticides, with an exemption for family farms. These revisions protect workers while ensuring agricultural productivity and preserving the traditions of family farms.

This proposal represents more than a decade of extensive stakeholder input by federal and state partners and from across the agricultural community including farm workers, farmers, and industry on the current EPA Worker Protection Standard (WPS) for Agricultural Pesticides first established in 1992.

Proposed changes to the Agricultural Worker Protection Standard (WPS) include: