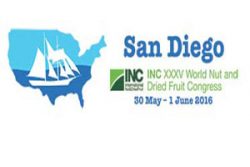 Ricchiuti is Positive on Almond Industry

“The greatest part of the conference was meeting a lot of good people—current customers and new people who handle and trade almonds globally,” said Ricchiuti.“We talked about the economic defaults in the Middle East, India and China and how they have affected current supply and demand.”

Ricchiuti said, “Everyone was questioning the 2 billion pound-subjective estimate for the almond crop,” USDA’s National Agricultural Statistics Service (NASS) early forecast about the coming Fall 2016 California almond crop developed after it is set [unripe nuts have emerged, ready to mature].

Many thought the subjective estimate was low—that more of a crop is out there. Some handlers and traders,“fear that if we don’t have a good progress shipment report for this next month, it would be a disadvantage,” he said.

But, having a more positive outlook, Ricchiuti held that the crop is at least that amount and could be more. “It’s a reality but it shouldn’t scare everyone in the marketplace that t

he price should go down any more. We need to be positive and I think the price can even move up a little more with the shipment reports being positive,” he said.

“We keep positive on shipment reports because everyone’s been buying hand-to-mouth. The warehouses are empty; there’s no one stockpiling almonds, even at the low prices. There’s hesitation in buying, but they’re buying on need and it’s picking up,” noted Ricchiuti.

Ricchiuti stated, “We just need to get these people away from thinking it’s doom and gloom and the sky is falling. It is not; it’s something that is very positive. First of all, there will be plenty of almonds to sell,” he elaborated.

“We had a good shipment month last month and this month looks like it’s going to be good. People are still hungry for almonds; they still want almonds, but pricing is disrupting the market.”

“Even if it’s more than two billion,” Ricchiuti commented, “we think there’s a world market and demand from the consumer for almonds will continue.” He expects they will have less carryover [unsold crop], which will help with diminishing supply. “We feel it’s stabilized now. It has come up somewhat, about 50 cents a pound in the last few weeks.” he said, “so that’s been very positive.”

Ricchiuti explained, “We are looking forward to the objective estimate [in late June to early July] to really hone in where we are, what the May shipment reports will be, and move on from there. We just need to keep a very positive marketing attitude, keep selling almonds and keep selling the consumer on how nutritious and how good they are for you.”

Ricchiuti said conference topics included the immense nutritional value of almonds, how good they are for you and the diversified uses—”more so than any of the other nuts. We need to teach this younger generation to include almonds into their lifestyle. ‘Hey, have a handful of almonds every day.'”