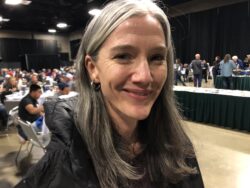 A farm advisor is working with a grower on an almond recycling program. Mae Culumber is a UCANR nut crop advisor in Fresno County. And she’s working on orchard recycling.

“ I have several different trials going on. One is on orchard recycling. We been working with a commercial grower where his trees have got to third leaf,” Culumber said. “And so they were doing their first shaking harvest of a Nonpareil and the Monterey variety and he was nice enough to when he planted the orchard, he let us set up a replicated experiment where we had control areas in the orchard where no chips were spread.”

Now, the chips are there because when the trees were pushed over and run through a chipper, the chimps were put back in the orchard as a orchard recycling program.

“They let us cordon off areas for different one acre plots where there were no wood chips applied. So now we’ve been able to go back in and look at yield differences between what would be like a normal planting versus one was wood chips,” she said. “And we’re still in the process of doing the crack out and analyzing the data. But we’ll be looking to see if there’s any early on yield differences.”

“We’ve been looking at differences in tree growth, you know, things like that,” she said.