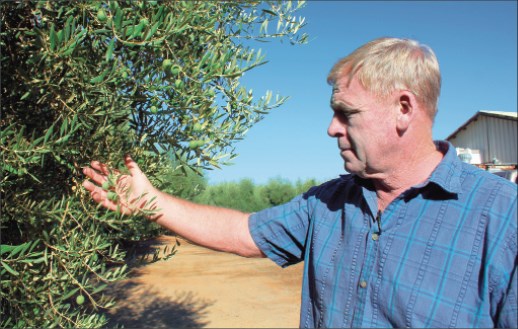 Freezing temperatures last winter coupled with impacts from the drought have left many California table olive growers in the San Joaquin Valley with not much of a crop this year.

Although the U.S. Department of Agriculture reported a production forecast of 50,000 tons—down from last year’s crop of 91,000 tons—Adin Hester, president of the Olive Growers Council of California, said he thinks the estimate is “on the high side” based on what growers are reporting in Tulare County, where there’s about 12,000 acres, or 60 percent of the state’s table olives.

“It’s real bad down here,” said Rod Burkett, a grower in Tulare County and chairman of the council. “We don’t have any fruit down here to speak of, between the frost, the extensive heat during bloom and the drought.”

Olive trees are alternate-bearing, and this would have been the “off” year, yielding a lighter crop, Hester noted. But with the added weather issues and the drought, growers had a particularly challenging year, he said.

Hester noted that at a growers meeting held by processer Bell-Carter Foods last week in Visalia, not one grower from the San Joaquin Valley predicted yields of 4 tons per acre. Very few said they had 2 to 3 tons per acre, while half of them said they’re not going to pick at all.

Patricia Darragh, executive director of the California Olive Oil Council, said estimates for the oil sector are not available until mid-September, but she expects the state will produce about 3.5 million gallons, similar to last year. She said the crop was going to be lighter this year anyway because of the alternate-bearing factor, but noted that some new trees have also come into production. Current acreage is about 35,000.

Unlike the state’s table olive production, which is concentrated in Tulare, Glenn and Tehama counties, oil olive production is “pretty far flung in the state,” Darragh said, “so that’s positive for us.”

Jack Bozzano, an olive oil producer in Stockton, said his crop is probably down by half this year, but he attributes that to the trees’ “off” year and said he did not experience much freeze damage.

Table-olive grower Burkett said the December freeze killed much of the new fruit wood that sets this year’s crop, leaving him with a total of 1 to 2 tons spread throughout his 30 acres. That’s compared to 4-and-a-half tons per acre last year.

“There’s no way that I can harvest,” he said.

Art Hutcheson, who also grows table olives in Tulare County, said in addition to frost damage, high temperatures during bloom hurt production. He described his crop as “light” and said he is debating whether it will be cost effective to harvest, even though his fruit will make good size.

“What we do pick is going to bring good money,” he said. “It’s just not going to be a whole lot of it.”

Growers in Northern California also experienced freeze damage, said Mike Silveria, a grower in Orland and chairman of the California Olive Committee. But their production was much better on the Manzanillo variety, which he described as an average crop, whereas the Sevillano variety appears to be a light crop.

The majority of the north state’s crop is in Glenn and Tehama counties, with about 6,000 acres of Manzanillos and 2,000 acres of Sevillanos, while Tulare County grows predominantly Manzanillos, Hester said.

Ross Turner, who grows both table and oil olives in Corning, said even though many farmers fallowed ground this year due to drought, there’s still concern about whether workers in the San Joaquin Valley would leave the area to travel north to pick olives, as they may not be able to find housing or may have family obligations that prevent them from leaving.

“Labor is an unknown quantity and we’re all scared to death about the availability of labor,” he said. “So many crops are coming on early this year and there’s going to be a competitive market.”

Turner said while he doesn’t have much volume on his trees, he thinks he has a “salvageable” crop that he hopes to pick. But the drought also increased his production costs this year because he had to pump water, he noted. Another added expense was trying to control the olive fruit fly, infestations of which have escalated, he said.

Silveria said his water district will be shutting off irrigation water around late September, but harvest in the north will probably run from early September into October, so growers will have to pick early before their water is shut off, unless they have access to groundwater.

Hester said a lack of water would shrivel the fruit, and processors would reject it. Water shortages could also impact next year’s crop, as water is needed to grow new fruit wood.

Silveria said olive trees are drought-tolerant and can survive with limited water, but growers still need water to make a good crop.

Water Rally in Tulare Needs You!

The only hope for farmers on both sides of this Valley to survive this year is a change in the Delta Operations by both the State and Federal governments in order to maximize the flexibilities they have under this crisis to deliver more water south of the Delta, so an upcoming rally is intended to send that message.

The initial event flyer for the rally along with a water supply update on the East Side farmers’ dire situation is below.