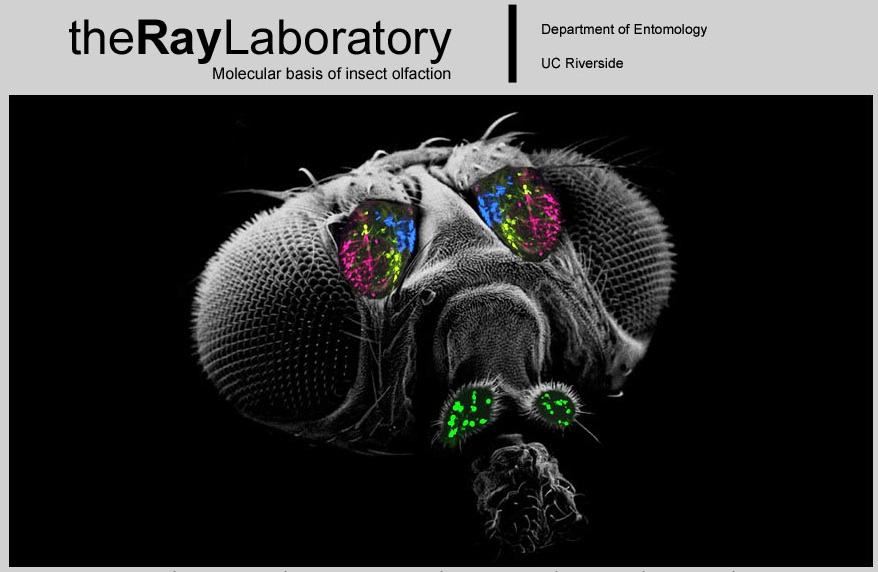 A University of California Riverside Asian citrus psyllid (ACP) research team, led by Anandasankar Ray, associate professor of entomology, has found a new tool that targets the ACP olfactory system.  The ACP olfactory system is sensitive to a variety of odorants (odor molecules) released by citrus plants; in fact the ACP depends on its sense of smell to identify its citrus hosts, and this discovery offers an opportunity to develop new attractants and repellents, according to Ray.

As reported in Entomology Today, Ray’s research has identified a blend of odorants found in nature, including myrcene, ethyl butyrate and p-cymen, that can lure ACPs to sticky traps. In the study, odor-based traps caught nearly 230 percent more ACPs than conventional traps placed on the same trees.  “What’s particularly encouraging is that these three chemicals are affordable, useful in small quantities, and safe for human handling,” said Ray, with the potential of being developed into monitoring, masking and surveillance tools.

“We anticipate that this odor-based insect lure could be of use to growers in California and other parts of the world where ACP invasion is occurring,” Ray commented. “Our study also reports identification of odors that block the ACP olfactory system from detecting citrus odors and have potential for development into repellents.”

“Similar approaches can be taken to develop control strategies using odors for other insect pests of crops as well,” Ray explained.  UCR has great strengths in insect chemosensory research ranging from chemical ecology to olfactory and gustatory neurobiology of behavior. With expertise ranging from very basic science to applied areas, several UCR collaborating laboratories are working to find ways to control insects that transmit diseases like West Nile virus and malaria, in addition to citrus greening disease. UCR discoveries have the potential to bring about a paradigm shift in controlling these diseases.

Study results on the lures were published in PLOS ONE, and the large-scale identification of odors detected by ACP was published in Chemical Senses.