Long-Term Problems May Be Ahead

If a market is lost, it takes time to get it back. California Ag Today recently spoke with Brian Kuehl, executive director of Farmers for Free Trade, about the topic. A concern is that competitors are entering the markets that we currently occupy.

“No farmers invest huge amounts of time and energy trying to open markets or trying to develop trade relationships, and they’re being torn up in a matter of months,” Kuehl said.

The renewal of NAFTA will help.

“If this is not resolved soon, we certainly are doing lasting damage to agriculture. It could trigger the next farm crisis,” Kuehl said.

It looks like the U.S. is moving toward a deal with Mexico on a renewal of NAFTA.

“Hopefully that would quickly lead to a deal with Canada,” Kuehl explained. “Mexico and Canada are our biggest trading partners.”

For many of our products, China is one our largest trading partners, and certainly one of the ones that is growing the fastest in terms of population.

“We do not want to squeeze ourselves out of the Chinese market for a decade to come; that that would be a colossal error,” Kuehl said.

The U.S. has routed products in the past. Some countries including Vietnam and Hong Kong route products into China.

“There might be a tariff on product going into China directly, but we know some of our growers are able to avoid the product that tariff by selling first to Vietnam and then Vietnam shifts into China,” Kuehl said. “That same tactic with Hong Kong is being shut down. China is getting much smarter at saying you can not circumvent our tariff, so we are going to hold you to these tariff rates.”

Ray Starling is Special Assistant to President Trump for Agriculture Trade and Food Assistance. He was the keynote speaker at the 2018 Citrus Showcase hosted by California Citrus Mutual.

He spoke about addressing imbalance in trade.

“The thing that the president wants to do is to address some of the imbalance that we have. We go out and negotiate these agreements,” Starling said. “We say that we’re all agreeing to the rules of the road and then all of a sudden in the middle of trading, when we will have almonds on a boat or we’ll have pork on a boat or have fruit on a boat and all of a sudden, we find out the rules have changed. That is not the kind of trade we’re talking about. We want to sort of fix those inequities, if you will.”

NAFTA also needs to be looked at closely.

“There are a number of chapters in the agreement and a lot of the things that we need to fix on agriculture, we have worked out,” Starling explained. “Some of those are things that are never going to make the news. They are agreements and understandings about maximum residue levels of pesticides. Their understanding about what is the tolerance of foreign matter in material that we may be shipping to Mexico or Canada.”

“But on the big issues for ag that we’ve still got to make progress on: One of those is with Canada, and it deals with the dairy issues,” Starling said. “They supposedly have a supply management system where they limit the amount that they produce in the country to get a higher price, but yet a lot of their products still ends up on the international market, so our point is if you’re going to have a supply management system, it’d be great if you actually manage your supply and then didn’t dump that product out on the world market to compete with American product out there.”

“I wouldn’t say that it has to be a sequential process like that. I mean, we’re always going to look for new agreements and new opportunities, but I think that often when we look at the way we’re resolving disagreements about trade, it’s a very long process,” he said.

“It takes years to go to the WTO and to get a successful outcome, and we’ve gotten many successful outcomes at the WTO, which some would argue is actually a sign that that system is not that successful because notwithstanding the fact that we keep winning there, we keep having to go there to get these solutions,” Starling explained. 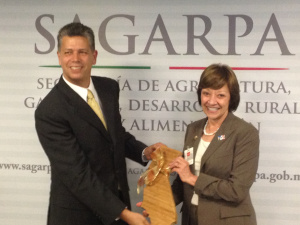 It speaks volumes that during our meetings in Mexico, the notion of “ganar-ganar,” or a “win-win” relationship was mentioned more than once. Our discussions have focused not only on building stronger trade relationships between our two markets, but in also in capitalizing on the shared resources of our people, climate and economy. A strong and growing Mexican market is a win for California and a win for Mexico.

In our meeting with Mexico’s Ministry of Agriculture, Livestock, Rural Development, Fisheries and Food  we discussed the great opportunities for cooperation between our two markets that can have long lasting benefits for both of our economies. Working collaboratively to solve cross-border trade delays that impact businesses on both sides of the border is an issue that can be resolved. Further, we wish to explore opportunities that jointly leverage our resources and production capacity.

We can no longer consider a California/Mexico divide. We need to see how cooperation can benefit us both in the long-run. I’ve committed to SAGARPA that within the next 60 days we will have progress in moving forward with a collaborative relationship that involves the public and business sectors finding solutions to cross-border issues that benefit both markets and producers.

Following our meetings with SAGARPA we had the pleasure of meeting with Walmart Mexico and Central America. The company also stressed cooperation and a “win-win” relationship that California and Mexico can share.

In celebrating the successes of the 20th Anniversary of the North American Free Trade Agreement (NAFTA), we should also celebrate the ongoing trade benefits of this relationship. Demonstrating this success, Walmart shared that their imports of U.S. produce has increased more than 10 percent each year for the last three years. This underscores that Mexico’s economy is growing and California is benefiting.

I look forward to furthering our trade relationship and cooperation with Mexico. It can be a “win-win” relationship like no other.