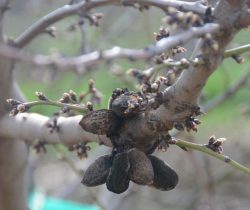 The Almond Board of California is excited to announce its third-annual Mummy Shake Video Contest, and we would deeply appreciate your help in spreading the word about this year’s competition. This contest is aimed at helping remind growers to break the link between mummy nuts (nuts left on the tree after harvest) and overwintering navel orangeworm (NOW).

NOW is the primary insect pest in California almonds, posing a high risk to the crop as the worms bore into the nut and feed on the nutmeat. This not only damages the nut but also opens the door to Aspergillus molds that can produce aflatoxins, a food safety contaminant.

To participate in this contest, almond industry and allied industry members are invited to submit a video of their families dancing – or even singing – along to The Mummy Shake! This year’s contest will run from Monday, Oct. 26, and end at 11:59 p.m. PT on Friday, Nov. 20. The winner of this year’s contest will receive a $500 Amazon gift card. Entries will be judged based on enthusiasm, creativity and composition, and a full list of contest rules may be found at Almonds.com/MummyShakeRules.

If you’re interested in helping us promote this year’s contest, please let me know. Sharing this event with industry stakeholders could include anything from mentioning the contest dates in an online calendar, sharing the contest in an email newsletter or on a social media page, or even giving the contest a shout out during a radio segment. Here’s some quick links to various mummy shake/NOW information that you may use in your promotions: 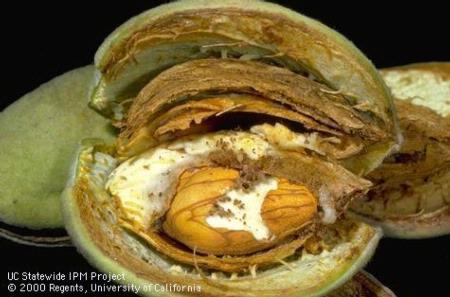 Mandatory Sanitation and Almonds and Pistachios to Fight Navel Orangeworm?

In the cotton pink bollworm program sanitation, a mandatory plow down of cotton stubble was a big part of the bollworm eradication strategy. Similarly in tree nuts the mummy nuts left in the tree post-harvest must be removed as they often harbor navel orangeworm larvae.

Joel Siegel is a USDA ARS entomologist based at Kearney near Fresno. He spoke recently at the American pistachio growers annual conference.

“Sanitation was a key element of the pink bollworm program. In fact, it was mandatory sanitation complete with people going out and checking and there were penalties for people that didn’t sanitize.,” noted Siegel. “One of the things that government does is they like to repeat all of the elements of what they think of as a successful program. If APHIS is making the investment, which they are in terms of providing the sterile insects for this navel orange worm program, logically they’re probably going to want mandatory sanitation as well.”

Again, it may be required to follow through with mandatory sanitation.

“There are challenges because we don’t have a standard. So what I tell people is to plan on getting everything out of the tree,” Siegel said.

The Almond Board of California recently announced an investment of $5.9 million in 85 independent research projects exploring next-generation farming practices. We will be exploring some of these initiatives this week, as they offer insights into challenges faced by California growers.

Josette Lewis, Director of Agricultural Affairs for the Almond Board of California, says one area of focus is the almond producers largest pest.

“Some significant investments in the area of navel orangeworm that affects everything from farmer management in the orchard during the growing season to cost at the handler level to sort out nuts that have been damaged by insects to our exporters who may face questions around aflatoxin and checks at export markets that could be very costly if aflatoxin rates, which are often associated with navel orangeworm, are found,”said Lewis.

“We continue to invest in integrated pest management systems or navel orangeworm,”she said. “We’re very excited to validate the value proposition of use of mating disruption as a new tool. And then also this year made a historic investment in looking at the use of sterile insect technology for navel orangeworm, which would be a powerful new IPM tool.” 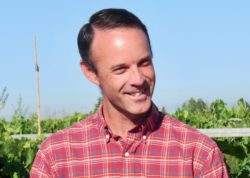 Mating disruption for navel orangeworm works. David Haviland is a UCANR, farm advisor, Kern County. “We all know navel orangeworm is not a simple pest to control and it takes an integrated pest management approach. We know the base of that sanitation—getting rid of all the mummies in the winter to make sure that we reset the clock when navel orangeworm comes back in the spring,” noted Haviland.

“We know that the earlier you harvest, the better you’re going to be. So early and timely harvest is going to help. We know insecticides helped. They’ve been around a while and they’re effective and, certainly, people are using them,” said Haviland. “At the same time, those three things alone don’t always control the pest to the level you need. And that’s where mating disruption can come in as the other leg on the IPM chair.”

Haviland has tested the mating disruption products. Currently, there are three different groups of products registered. There are the aerosol products that releases pheromone throughout at certain intervals throughout the season. The second group, what we call the Meso emitter, that’s a rubber strip that’s hung in the trees that passively releases the pheromone all year and the third group, which is new, is as a sprayable pheromone. It’s one that you put in the tank and you spray it along with an insecticide or fungicide.

“In 2017 trials the big take-home message this that all three of the aerosol products were effective. They all work well, as does the Meso emitter, so all those work about the same,” noted Haviland.

In 2017/2018 Haviland had larger trials that confirmed their previous results. “The earlier trial showed a 40 to 50% reduction in damage, while the later trial on larger acreage showed a 60 to 70% reduction in damage, which was a positive return on investment to the grower,” he said.  In 2018, Haviland conducted the first UC trial on sprayable pheromone products.  They did not work very well.

Last year was a bad year for navel orangeworm (NOW) mainly in pistachios, but also in almonds. If left in the trees, infested nuts become a great reservoir for more NOW to inhabit them.

Joel Siegel, a research entomologist for the USDA Agricultural Research Service based in Parlier, stresses the importance of having a good sanitation plan in place to remove those NOW mummy nuts. “When we talk about sanitation, it should be the foundation for everyone’s nut program. That’s something that you control.”

“In almonds, it’s absolutely essential. Where we’ve taken a look at it in the south, every infected mummy per tree is good for 1 percent damage. So going from one mummy to two mummies, your damage on average increases another 1 percent.”

Siegel noted that while pistachio growers can clear mummy nuts off the tree, the industry has not been able to shred the fallen pistachios effectively. The hard, rounded pistachio shells just bounce around in the shredder machine.

“What you can do is shake them off the tree as soon as possible so they’re on the ground where they can start rotting. You get those weeds growing around them. It has been shown that they break down faster in the weeds,” said Siegel.

“Growers disc them in. But if you’re going to disc them in, you have to disc them twice. Again, you’re not destroying the nuts, you are burying them so that NOW cannot lay eggs in the spring,” he said.

The risk of poor sanitation is high. Considerable NOW damage can prevent pistachio and almond growers from earning the premium paid for nuts that are pest-free.

Almond Growers Get Ready to Treat for Navel Orangeworm

Almond and Pistachio growers should be ready to fight back on a particular seasonal pest this year.

Joel Siegel is a research Entomologist with USDA ARS in the Fresno County Office in Parlier. He is an expert on troubling pest for Almonds and Pistachios called NavelOrangeworm. He said growers need to be ready.

“Ok the big thing this year is because of the heat. If the almonds, if the non [ prowlers?] are splitting earlier you better be prepared to be spraying earlier,” said Siegel. “Its really based on nut vulnerability in my opinion, so you have to make your plans now. Get your materials secured so that you’re ready to move.” he added.

Growers need to get ready to protect their crops. Siegel discusses how another important crop, Pistachios need to be protected from the Navel Orangeworm.

“With pistachios, its harder to predict vulnerability, but all of this heat means we have the potential for an additional generation at least. So there could be more pressure. And again there is going to be more of a need to scout, and again make your plans in advance, and make sure you have your materials lined up.

Because of the daytime heat, Siegel said we are ahead of last year, which was a bad year for NOW.

“Well what we are in terms of heat units, is depending where anywhere between four to eleven days ahead where we were last year. And again, from talking to people on the nonpareil seem to be, maybe eight to ten days earlier this year,”

Siegel said just like almonds, being prepared is the most essential.

“If everything is vulnerable earlier you have to be prepared to move earlier than you’re used to doing it. With pistachios, there might be that dragged out cluster development, and again if people are going to have to harvest late, there is going to be more pressure on the back end.” said Siegel.