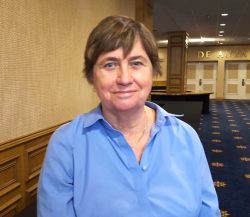 UC Davis is home to Foundation Plant Services (FPS), a plant repository the world relies on for plant importation and quarantine, disease testing, virus elimination, and DNA identification services for a variety of plants and rootstocks. FPS also coordinates the release of UC-patented horticultural varieties and provides an essential link between researchers, nurseries and producers.

“Established at UC Davis in 1958, FPS has grown from a small kind-of-mom-and-pop scientific effort sourcing out cherry and grapevine cuttings that have been screened for virus to nurseries so that they could make better plants for growers,” said Deborah Golino, director of FPS since 1994. “FPS has grown to the point where it is a self-supporting center. We owe a lot to the growers and nursery industry that have supported us over these years,” she said.

Today FPS employs about 35 people on “soft money,” including scientists in the lab and people in the green houses, as well as propagators, and field workers. About 250 acres of various plantings—largely grapes of course—plus programs with strawberries and sweet potatoes that are mostly run in green houses,” noted Golino.

“All other programs circle around getting correctly identified, valuable commercial plant materials (cultivars). Many times, great people save varieties, and screening them for virus and making sure that commercial nurseries have that virus screened materials, so they can make plants for farmers that have the added productivity and sustainability that comes with clean material,” explained Golino.

FPS advances clean material in the lab by cutting out a meristem shoot tip and grow a plant from that. “Let’s say we have a valuable Chardonnay that came in from France. It’s a new clone and it has a couple of viruses in it. In a process that takes about a year, we take a micro-shoot tip culture and regenerate a plant,” Golino said. “For reasons that aren’t really fully understood, regenerating that plant from the tiny .5 millimeter piece gets rid of viruses. That’s our therapy, but what we give to most nurseries and growers who buy material from us is that little plant grown up in the field, and we might have hundreds or even thousand of cuttings of some root stocks.”

“The most common route for advancing a clean plant cultivar is by nurseries coming in to buy several hundred cuttings,” Golino explained, “and plant them in a field. Those plantings grow big mother plants from which they harvest more cuttings to be grown and eventually sold to growers. It’s a multi-year generational process.”

“We have over 900 cultivars of grapes and over 5,000 accessions because we have multiple clones of Chardonnay and Pinot Noir,” Golino said. “All of that material is improved by the technology we have used, technology that has been developed by other UC researchers to conduct DNA identification to ensure accuracy, which is part of the FPS mission.”

“That material is held as a trust to improve our agricultural offerings to growers of fruit trees and other crops,” Golino said. “Even though much of the material is not produced by UC growers and might even be produced by a Cornell or a Michigan breeder, it is still important to our agriculture here in California and across the country since the 2008 Farm Bill was passed. I think we owe Congressman Sam Farr (CA -20) a tribute for that. Since then, there has been money for the National Clean Plant Network with USDA’s Animal and Plant Inspection Service (APHIS) and they have funded about 20 clean plant centers around the country.”

“FPS certainly provides the highest level of screening in the world,” Golino stated, “and I think we might be the biggest too. In this modern world where margins are so thin, the universities are so tight for money for research and especially for teaching, and they have so many challenges taking care of those things, the experiment station does not have much money for service work, like the work that is done at FPS.”

“FPS conducts its work for industry, and that isn’t really directly relative to the university’s mission which has to be strictly accommodated. That is why California grape and fruit tree nurseries have assessed themselves to fund our programs since the mid 1980s,” said Golino. “And then we have the clean plant money on top of that, and our grape nurseries actually pay user fees on the plant material they make from our material. That keeps the doors open and keeps us doing world class work,” Golino said.