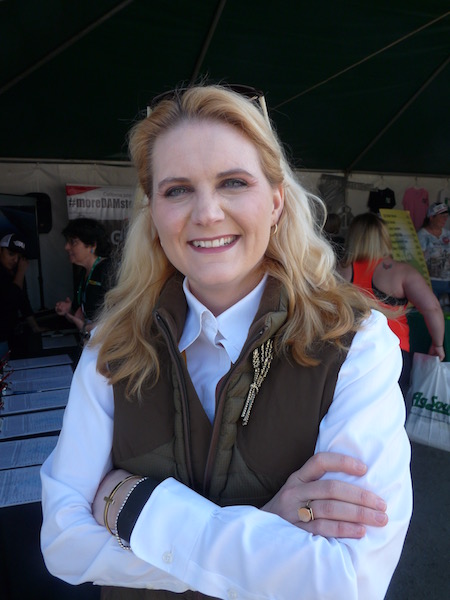 California Water 4 All Initiative Still On for 2016, with 2018 as Backup Plan

Late last week, word spread that the @CaWater4All Initiative may postpone the Water Priorities Constitutional Amendment and Bond Act proposition from the 2016 ballot to the 2018 ballot. California Ag Today’s Patrick Cavanaugh, farm news director, spoke with Aubrey Bettencourt, executive director of the California Water Alliance, which is behind the initiative, with major funding by California Westside Farmers State PAC (FPPC #1381113).

Cavanaugh: Is the @CaWater4All Initiative campaign still slated for the 2016 ballot?

Bettencourt: We did not stop the campaign, but we do have two deadlines. In other words, we are looking at all options. We are still on track for 2016; we are not letting up on gathering signatures. And if for some reason we reach the April 26, 2016, deadline for placement on the November 2016 ballot, but with an insufficient number of signatures, then we will steer for the 2018 ballot. I feel strongly that support is still there to pass the measure.

Cavanaugh: So there is a full-court press for unpaid volunteers to get the signatures by the 2016 ballot deadline. How will you ramp up the volunteers to sprint to the finish line?

Bettencourt: We are working on strengthening and systematizing our volunteer coordination across fourteen counties so it can be replicated among the various teams in Riverside, Los Angeles and Fresno, for example, working in concert. We know what works for each team, and we want to share event promotions and workloads and more.

Our ground game for the next few weeks will become completely guerrilla. I’m actually surprised how well developed our infrastructure has become statewide already, and I think with a little more coordination, it will be a force of nature.

We are also continuing to build connections outside of agriculture because this issue is so much more than agriculture.

Finally, if conditions change on paid-signature gathering pricing, we of course will return to paid collection.

Cavanaugh: Will the signatures for the 2016 ballot be valid for the 2018 ballot?

Cavanaugh: I understand one reason you added the 2018 option was the sudden and crazy surge in street price for paid signature gatherers – more than double their previous rate?

Bettencourt: There are currently 12 propositions in the state that need signatures, so the price per signature has jumped from $2.00 to $5.00 and could go higher in a last ditch scramble to qualify by the April 26 deadline. Never before this year has an initiative signature gone above $3.00; this is truly unprecedented! We had budgeted to gather signatures at $2.65 to $3.65 each, normally a strong offer, but it would be irresponsible and unsustainable to be caught in the frenzy and pay double for signatures without guarantee of qualification. Such an expenditure would have implications for the fall election campaign for the measure if we qualify. For this reason, we simply told the company to pause on gathering signatures for the time being, but to remain on stand-by. We expect the market will shortly calm down.

Cavanaugh: So in tapping the breaks on the professional signatures, you are now relying on the volunteer base to get the needed number?

Bettencourt: We have swung our resources over to maximize our already strong volunteer side. We will continue our fundraising, of course. If we reach the week before the April 26 deadline and think we have enough signatures, we will turn them in to qualify for the November 2016 ballot. If not, we will continue collection until we qualify for the 2018 election instead.

Cavanaugh: Are there any benefits to being on the 2018 ballot?

Bettencourt: Yes, there are a couple of positives to rolling to 2018. When the April 26 deadline hits, the other 11 or so propositions that are paying $4 to $5 per signature may all either qualify, roll over, or drop out. Then the initiative market stabilizes, we can jump back in and pay only $2 per signature or less, a significant savings. With no other propositions on the street, the price will drop, the field will be clear and our efforts will yield higher numbers of signatures.

More importantly, if we were to qualify for 2018, we would be among the first propositions to qualify, and we would be higher up on the ballot. Ballot position is important; if you are low on the ballot, the likelihood of getting a ‘yes’ vote is generally more difficult.

The mid-term election without a presidential election can also create a less expensive election with fewer initiatives. And with Governor Brown a lame duck in his last year as governor in 2018, he may be less inclined or he may lack fundraising capacity and resources to fight our initiative. Some Democratic candidates for his seat are already declared opponents of High-Speed Rail, so that would also help.

Cavanaugh: What about the provision in your initiative that would reallocate $8 billion in unused High Speed Rail (HSR) bonds to water storage? Will that fund be essentially empty in 2018?

Bettencourt: We double-checked with attorneys engaged in fighting HSR and with the Citizens for California High Speed Rail Accountability (CCHSRA) group. Both said the HSR Authority could not access that funding in the interim, unless they were to fulfill their complete system plan. Given they are not close now and never have been, and HSR continues to be held accountable through the courts, it is highly unlikely they will be able to touch that money in the next two years.

Cavanaugh: And what about the Prop 1 dollars allocated for more storage? Will the funding still be available in 2018?

Bettencourt: I’ve been told there is currently an estimated $40 billion worth of water projects competing for the $2.7 billion of Prop 1 funding, including Sites and Temperance Reservoirs and numerous groundwater projects and water recycling programs, and more. And Prop 1 does not guarantee the construction of any one of them. For the next two years, the California Water Commission will try to finalize its criteria and process for considering and valuing project applications, approve some project applications, and perhaps appropriate funds to them. If the Water4All initiative qualifies for the 2018 ballot, we have two years to make the same case that we have been making so far:

Cavanaugh: Can you explain how growers in northern California will be safe with their senior water rights if the initiative passes? There seems to be great concern there.

Bettencourt: There are two specific exemptions within the Water4All Initiative that protects all established water rights structures in California—the foundation and bedrock of our water system. Keeping these rights protected and intact when we wrote this initiative was critically important. So, our constitutional amendment refers only to prioritization of beneficial uses, which is defined as the purpose for which water is used after it has been diverted by rights. It does not change the underlying rights, whether senior or junior, consumptive or non-consumptive, or any rights subject to contractual agreements such as those held by the Sacramento River Exchange Contractors with the Central Valley Project.

By definition, beneficial use is subservient to water rights. Our constitutional amendment, as well as in the statutory bond funding portion, has specific exemptions for all pre-1914 water rights, area or origins and existing water rights structures.

Cavanaugh: It seems, then, the initiative strengthens senior water rights?

Bettencourt: Many attorneys who have experience on matters specific to pre-1914 and other water rights, have said the initiative actually strengthens existing water right structures.

It reaffirms both the past decisions of the people of our state and our earlier legislature that respectively created Article X of the Constitution and the California Water Code’s laws. Moving Section 106 of the Water Code to the Constitution resets water law to a preexisting legal framework that long guided California’s water-use decisions, but is now muddled by the courts and legislature. Restoring this clarity will yield lasting benefits to the state’s people.

It will end attempts to grab water from existing rights-holders and divert it away from the purposes for which our water systems were designed and built.