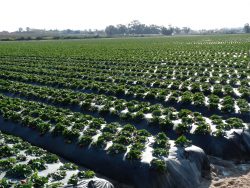 The strawberry fruit production industry, with the exception of plant nurseries, has reached the point where methyl bromide is no longer available under any circumstances, and new alternatives or strategies must be found to protect strawberries from serious diseases.

The University of California is focused on a holistic approach, which includes the tried-and-true method of integrated pest management in this post Methyl Bromide era.

“None of the alternative fumigants are as good as methyl bromide,” said Mark Bolda, UC Cooperative Extension Farm Advisor for Santa Cruz County, who is working closely with growers on alternative methods. “So one area that we could focus on is different strategies at the time of planting. For example, strawberries have different chill times. You must add cold conditioning to give the plant more vigor.”

There are many questions. Could the colors of the plastic mulch that growers are using manage the temperatures of the soil? How about the amount of fertilizer that is being used?

“It’s a little disappointing that here we are at zero-hour and we do not have this worked out,” he continued. “The University of California Cooperative Extension have had a number of meetings in my office, as well as other places where we get many people in the same room to try to figure out what we know and what we don’t know.”

“There’s a lot of smart people in the industry, and I know we can get on this and find solutions,” he said. 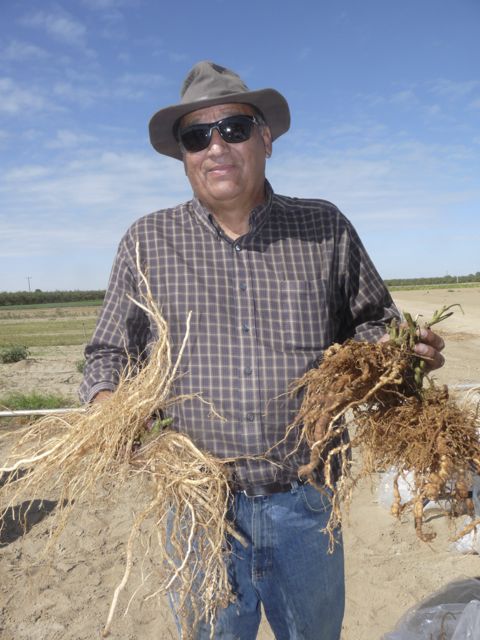 New Nematicide is A Game Changer for Vegetable Growers

NIMITZ, a revolutionary product, delivers an unmatched combination of efficacy, simplicity and safety for control of plant-parasitic nematodes on commercial vegetables.

With its fast-acting and unique mode of action, NIMITZ raises industry standards. As a truer, more complete contact nematicide, it also fills a void in the absence of methyl bromide.

“NIMITZ is a contact nematicide, not a fumigant,” says Herb Young, ADAMA brand leader. “And because of its residual activity, NIMITZ’s control of nematodes often exceeds the commercial standards. The distinct advantage over other nematicides is that it frees growers from complications, liabilities, and dangers associated with fumigants.”

As a non-gas formulation, the active ingredient in NIMITZ is distributed through the soil and into contact with nematodes through irrigation or rainfall. Unlike older chemistries, there is no mandatory tarping or specialized machinery requirement. Applications may include broadcast or banding with mechanical incorporation or through drip-injection.

As a ‘true nematicide’, NIMITZ causes irreversible nematicidal activity which results in pest mortality within 48 hours of application, rather than temporary nematostatic (immobilizing) activity as seen with organophosphates and carbamate nematicides.

“NMITZ is lethal to nematodes. As a result, we see greatly improved root health all season which leads to yield enhancement,” says Young.

The US Environmental Protection Agency (EPA) wrote in the Federal Docket on July 24, 2014 that, “Fluensulfone (NIMITZ) represents a safer alternative for nematode control with a new mode of action and a much simpler and straightforward product label.”

A secondary crop tier has been submitted to the EPA for future registration on potatoes, strawberries, carrots, tobacco and turf.

As new tool for California vegetable growers, NIMITZ has the potential to bring safety and simplicity to the nematode control arena which is constantly under increasing regulatory pressure.