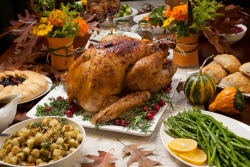 California Feeds the Nation on Thanksgiving!

California ranks #8 in turkey production in the United States (2016), and we supply most of the western states from our poultry farms located in several areas in the state.

The famous Mrs. Cubbison’s Stuffing or “Dressing” originated from a ç, born in 1890 in the San Marcos area of San Diego County. In short, Cubbison graduated from California Polytechnical University in May 1920 with a degree in Home Economics having paid her way through school with the money she earned feeding the farm workers.

Cubbison created her popular stuffing in 1948 using broken pieces of the popular Melba toast and various seasonings. The factory in Commerce, California churns it out in mass quantities this time of year.

These are all celebrated Thanksgiving foods.

An ample supply of freshly harvested oranges and kiwi fruit, table grapes, strawberries, and raspberries are shipped from many areas in the state. Seasonal features include sweet potatoes from the Merced, about an hour north of Fresno, plus all kinds and colors of potatoes and tomatoes, parsley, onions, and garlic—all crops are raised in California.

Nearly all the fruits, vegetables and nuts that are part of America’s Thanksgiving are sourced from California.

Don’t forget about the great varieties of wine grapes grown in the No. 1 agricultural state that are deftly crafted into delectable California wines.

Or the thirst-quenching Martinelli sparkling apple or grape cider from Watsonville California, near the Monterey Bay area. Local growers provide the tree-ripened fruit to the award-winning company that is still family-owned after almost 150 years and is managed by the founder’s grandson and great-grandson. Here’s something to discuss at your Thanksgiving meal:  the company won its first Gold Medal at the 1890 California State Fair in  Sacramento.

How about those heirloom and new apple varieties, plus those small round watermelons that we snack on or toss into a dessert fruit salad, topped with California pomegranate arils?

Of course, we raise poultry, and even California lamb, if you want to go that way. Here is a Did-you-know? challenge for your holiday meal:  What are the most recent Presidental Thanksgiving Turkeys from California pardoned by United States presidents? (Answers are below.)

And by the way, you know that food-safety pop-up turkey timer that indicates when the turkey has reached the correct internal temperature? Public relations genius Leo Pearlstein and a turkey producer in Turlock, a small town north of Fresno in Stanislaus County, invented this Thanksgiving fixture.

Back in the 1960s, they were sitting in a room trying to solve the undercooked poultry challenge, when they looked up and noticed ceiling fire sprinklers. The sprinklers sprayed water when the room temperature became hot enough to melt a tiny piece of metal alloy in the mechanism. This innovative team of two applied the same concept to the pop-up timer!

With the exception of cranberries, our national day of giving thanks for a bountiful harvest is really a California Thanksgiving.

Here are some friendly topics for discussion at your Thanksgiving Table:

The Presidential Turkey flock are Nicholas White turkeys, which originated in California’s Sonoma Valley in 1957. Today, the Nicholas White is the industry standard. (Foster Farms)

From California’s Farms to Your Table

You’ve got oranges and kiwi fruit, table grapes, strawberries, raspberries freshly harvested from the Salinas and the San Joaquin Valleys. You’ve got sweet potatoes from Merced County — this is their pinnacle season. You’ve got all kinds, colors and sizes of potatoes and tomatoes, plus parsley, onions and garlic. . .  all grown in California.

Of course, you’ve got Martinelli’s sparkling apple or grape cider from Watsonville, near the Monterey Bay area. Local growers provide the tree-ripened fruit to the award-winning company, which is still family-owned and is run by the founder’s grandson and great-grandson.

At more than 140 years old, Martinelli’s is merely one century younger than our nation. In fact, the company received a first place award at the California State Fair in 1890.

Pearlstein said he and the turkey rancher were sitting in Pearlstein’s test kitchen mulling over ways consumers could determine when the turkey was done. They noticed the fire sprinkler system overhead. When the kitchen gets too hot, the fire sprinkler turns on. A metal alloy in the sprinkler is activated or melted when subjected to the high temperature of a fire in the room (185 degrees Fahrenheit). They applied that concept to the pop-up timer.