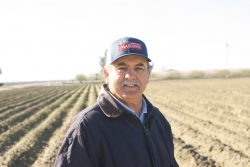 Doug Mederos to be Tulare’s Farmer of the Year

On March 29, the Kiwanis Club of Tulare County will recognize Doug Mederos as the 57th Farmer of the Year. Mederos – a diversified farmer and owner of Doug Les Farms in Tulare County – grows almonds, pistachios, cotton, silage corn and black-eyed peas. Mederos farms 600 acres and manages another 300 acres for his brother.

Mederos told California Ag Today the award caught him by surprise. “It is pretty humbling,” he said, “especially when you see the list of growers they picked [in prior years], and you always wonder, ‘Do I fit in this list or not?’”

Mederos’ family has been farming for several generations. “My grandfather came over in 1920 and started a dairy, P & M Farms, with his brother. When my father got out of the military, he joined the partnership with my grandfather and my uncle and my uncle’s son, Larry Pires.

“Along the way, my two brothers and my cousin’s sister, Loretta, all worked at the farm. My cousin Larry and I eventually became partners in the Pires and Mederos Dairy operation after we graduated from college.

The partners decided to move the dairy out of California and chose South Dakota. Mederos explained, “I stayed here farming in California, and I’ve been pretty fortunate over the years. We’ve had good years and bad years, but the majority of them have been good. Hopefully continuing on so that at some point I get to retire.”

Mederos’ children may continue their family’s legacy of farming in the Central Valley. “Probably my son or somebody will take over,” Mederos said. “He’s going to go off to Fresno State and to major in Ag business, so hopefully in a few years, he’ll be back here. Who knows, maybe it will be my daughter who comes around and ends up running the farm. You never know.”