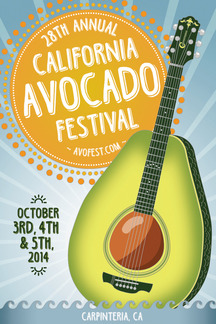 The idea of the California Avocado Festival began in 1986 at a meeting between community leaders Rob Godfrey, Connie Korbel, Debbie Murphy, Fran Puccinelli, Bob Ealee and John Franklin. A brainstorming meeting was called to create an ongoing weekend event that would benefit the fundraising efforts of the local non-profit groups. It seemed the plan would also help promote Carpinteria as a Southern California weekend getaway destination and boost our local economy.

In 2013, the Festival reached its goal of Zero Waste with the exceptional help of E.J. Harrison. This is the 2nd year in a row that the California Avocado Festival can boast Zero Waste – a strong testament to E.J. Harrison’s commitment to their company motto, “Service is Everything.”

Here are some of the high standards that the California Avocado Festival holds to, allowing them to create a Green environment.

We are one of the largest free music festivals in California with over 75 acts on four stages. Check out the Stages Page for line-up updates.