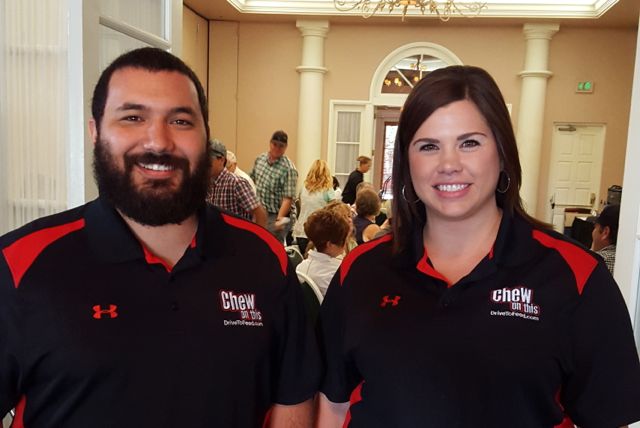 Kyle Olguin and Sarah Weber on Chew On This Tour

To counter the abounding misconceptions surrounding agriculture, companies are fighting back through education. Kyle Olguin, assistant operations manager for Nutra Blend LLC, a company that specializes in manufacturing nutrients for the feed industry, said that Nutra Blend began a program called “Chew On This Tour” to educate consumers about common farming misconceptions.

For the tour, Olguin said, “we drive trucks around the country, trucks turned into movie theatres, and educate people on where their food comes from, the misconceptions about farming, what we [farmers] do in America, and how we have one of the safest food supplies in the world.”

Olguin said that the perception of agriculture among the masses is that Ag is unnecessary because of the existence of grocery stores.

“So we decided to start a campaign, and we kicked it off in Oregon driving this truck around the U.S. and showing people one simple video.” Olguin said, “We ask people questions, like: How many eggs does a chicken lay? How many pounds of bacon do you get from one cow?”

Sarah Weber, a sales representative for Nutra Blend, said the next step for the program was to raise money for backpack programs linked with food banks.

“The second movement is ‘Drive to Feed Kids’,” Weber said, “a nonprofit program with our suppliers and vendors to work with our customers, in their own communities, to raise money for student backpack programs that are linked in with the food banks.”

Weber said, “Our third stage in this movement is the ‘Ivy League Farmer’,” Weber said, “which is a movie that has been produced and will air on network TV pending this fall. It is a reflection on a dairy farm and the positive influence the farm has on the community. It is a way for us to reach out to the public with an emotionally positive connection to educate them.”