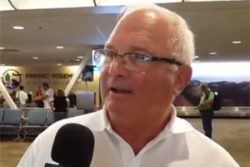 Joel Nelsen, president of California Citrus Mutual based in Exeter, Calif., spoke about his advocacy for growers and the impact Brexit has on U.S. agricultural trade as he arrived at the Fresno Yosemite International Airport from Washington, D.C. last week. Brexit is an abbreviation of “British exit,” which refers to the June 23, 2016 referendum by British voters to exit the European Union (EU), according to Investopedia.

Nelsen explained, “There were two missions I was on while I was in Washington. One had to do with a proposal to allow lemon imports from Argentina. We’re definitely opposed to it because of pests and diseases, and a lack of transparency in that country over the last one to two decades.”

“We have a comment period,” Nelsen continued, “but we have asked for an extension on that comment period because of the scope of the rule and the economic impact, and we haven’t heard a word on that,” he said. “We met with our colleagues and friends in Washington, D.C.  Senator Feinstein, Senator Boxer and a couple of House Office Committees have agreed to make a phone call to the Secretary of Agriculture and get a determination on that,” he said.

The second purpose of Nelson’s trip was to discuss trade and the impact on the U.S. economy due to the recent Brexit, as Nelsen is chairman of the Fresh Fruit and Vegetable Agricultural Technical Advisory Committee (ATAC), a national trade committee that offers information and advice about agricultural products and trade issues to the USDA Secretary of Agriculture and the U.S. Trade Representative. “People from across the country came, and we talked about trade subjects, such as the Trans-Pacific Partnership (TPP) agreement and Britain’s separating itself from the EU,” said Nelsen. “It’s obvious that this upset everybody; Ambassador Michael Froman, United States Trade Representative (USTR) who advises the president on international trade and investment issues, said, “I know what I don’t know, and I don’t know a lot right now.”

Nelson explained, “We think [Brexit] will slow down the fresh fruit and vegetable sector, as well as the passage of the Transatlantic Trade and Investment Partnership (T-TIP). According to the USDA Foreign Agricultural Service, since the U.S. market share of agricultural products and food imported by the EU—the world’s largest importer in the category—is shrinking despite continued growth of the EU market, T-TIP negotiations offer a major opportunity to address unjustified tariff and non-tariff trade barriers to U.S. exports.

“Quite frankly,” Nelsen summarized, “we’re less than excited about [T-TIP] because it didn’t address the inherent problem that we have from competition: fresh fruit and vegetable producers in the EU get a direct subsidy and growers in the United States do not.”

Some additional members of the ATAC for Trade in Fruits and Vegetables include: