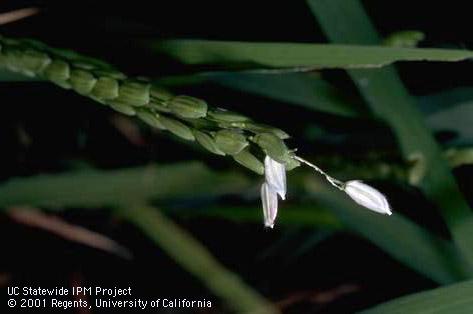 Farmers face many threats to their crops on a daily basis. Luis Espino, rice farm advisor UC ANR Cooperative Extension, Colusa County, said rice farmers are on the lookout for two caterpillar infestations during the year when armyworms invade rice fields. “The first one occurs sometime in June,” Espino said. “At that time all they do is just eat the foliage, and you can usually see it when you walk into a field. Nevertheless, the rice has a very good capacity to recover from that type of injury.” Espino’s UC Rice Blog explains it is difficult to accurately estimate yield losses due to early armyworm damage because it can reduce tillering, delay the crop, and cause uneven maturity.

“Heading” occurs when the rice plant prepares to enter its reproductive phase. The first sign, called the ‘booting’ stage, is when the leaf stem that conceals the developing panicle bulges. Then the tip of the developing panicle emerges from the stem and continues to grow. Rice is said to be at the ‘heading’ stage when the panicle is fully visible. Flowering begins a day after heading has completed. As the flowers open they shed their pollen on each other so that pollination can occur. Flowering can continue for about 7 days.  (Source: Rice Development, Ricepedia.)

“The second infestation usually occurs in mid- to late-August when the rice is heading out,” Espino said. “At that time, armyworms can feed on the panicles, [causing the kernels to dry before filling], resulting in blanks [without kernels to harvest] on the panicles and broken panicle branches. That’s when armyworms are more important.”

Espino said that the first infestation this year was relatively large, making it harder for the treatments to control the armyworms as they devastated the rice fields. “There were some areas in fields where the rice was down to the waters,” Espino said. “so all the foliage was consumed, and sometimes only a little stem was left standing.”

During the second armyworm infestation, however, Espino said the rice fields were not as badly affected as they had been in the first attack. “We did see some fields with armyworm injury,” Espino said,“ and some farmers had to treat their fields. The numbers were just so big that the treatments were not controlling them.”

CDFA has already begun to saturate the affected area with detection traps in order to determine the extent of any infestation.The United States Department of Agriculture’s Animal and Plant Health Inspection Service (USDA-APHIS) and CDFA will work collaboratively to determine what steps are taken next.

The Asian citrus psyllid is an invasive species of grave concern because it can carry the disease Huanglongbing (HLB), also known as citrus greening. All citrus and closely related species are susceptible hosts for both the insect and the disease. There is no cure once a tree becomes infected. The diseased tree will decline in health, producing bitter, misshaped fruit until it dies. To date, HLB has been detected on just one residential property in the Hacienda Heights neighborhood of Los Angeles.

“Our staff will continue to support the efforts of our $750 million citrus industry, as well as our residential citrus owners,” said Tulare County Ag Commissioner Marilyn Kinoshita. “I want to emphasize that citrus fruit is safe to eat and the disease is not harmful to human health.”

Residents in the area who think they may have seen the pest are urged to call CDFA’s Pest Hotline at 1-800-491-1899 or the Tulare County Agricultural Commissioner at (559) 684-3350. Media inquiries related to technical questions about Asian Citrus Psyllid and Huanglongbing disease are encouraged to contact Katie Rowland, Account Coordinator for Nuffer, Smith, Tucker Inc. at (661) 817-3638. For additional inofrmaiton, click on the USDA’s Save Our Citrus website.

A quarantine has been declared due to a Mediterranean fruit fly (Medfly) infestation detected in the city of Los Angeles. One adult male and five unmated females were detected in five traps between March 3 and 12, 2014, and four larvae were discovered in backyard fruit on March 18.

The Medfly can infest more than 250 types of fruits and vegetables, causing severe impacts on California agricultural exports and backyard gardens alike. Residents who believe their fruits and vegetables are infested with fruit fly larvae are encouraged to call the state’s toll-free Pest Hotline at 1-800-491-1899.

To eradicate the infestation, the increased release of sterile male Medflies began last week, at a rate of 250,000 flies per square mile per week, double the normal rate in that area.

The sterile male Medflies are brought to California by the joint CDFA/USDA sterile insect rearing facility in Los Alamitos, which prepares sterile flies for release everyday over the Los Angeles Basin.

The sterile release program has a proven track record of eradication in southern California. Sterile male flies mate with fertile female flies in the environment but produce no offspring.

The Medfly population decreases as the wild flies reach the end of their natural life span with no offspring to replace them, ultimately resulting in the eradication of the pest.

The enhanced release area is approximately 25 square miles. In addition, properties within 200 meters of detections are being treated with an organic formulation of Spinosad, which originates from naturally-occurring bacteria, in order to eliminate any mated females and reduce the density of the population.

Finally, fruit removal will occur within 100 meters of the larval detection property in order to remove any fruit infested with eggs and larvae.

“Our pest prevention system to detect and respond to invasive species like the Mediterranean fruit fly is working well and according to design,” said CDFA Secretary Karen Ross. “The release of sterile Medflies is a proven method of eradicating an infestation. The key is to move swiftly and take action before the pests can cause widespread damage and become established.”

The quarantine will affect any growers, wholesalers, and retailers of susceptible fruit in the area as well as local residents – home gardeners are urged to consume homegrown produce on site and not move it from their property.

The eradication approach in the Los Angeles area is the standard Medfly program used by CDFA and it’s the safest, most effective and efficient response program available. 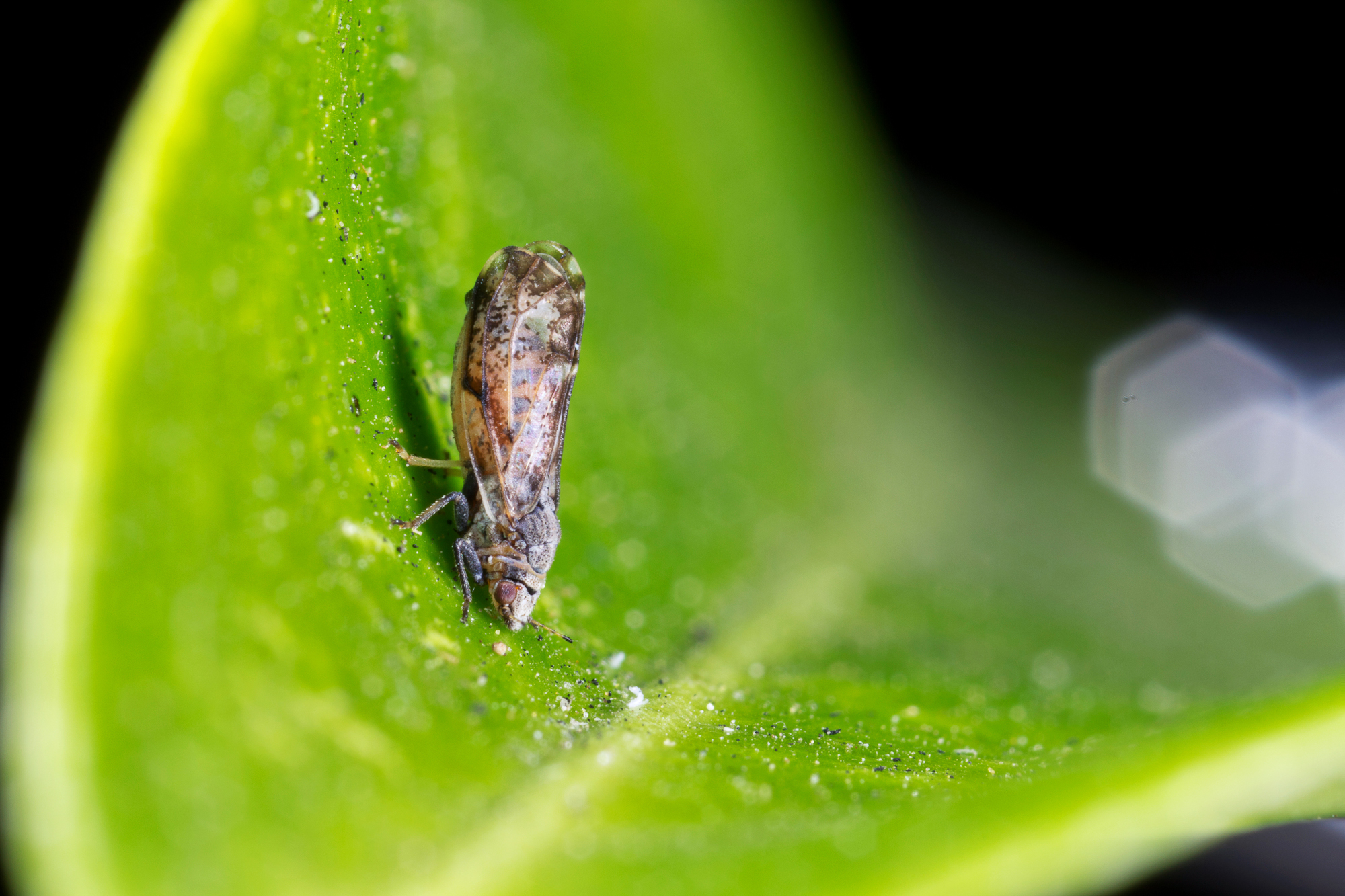 The California Department of Food and Agriculture‘s (CDFA) Asian Citrus Psyllid (ACP) and Huanglongbing (HLB) Ad Hoc Science Advisory Panel (SAP) is a group of scientists selected by the Secretary to provide scientific advice to the Department to ensure that they are using the best science available when developing program policy and protocols.

These scientists consist of experts from states that have already experienced the sequence of events associated with ACP/HLB infestation, as well as California-based scientists with local knowledge to ensure a diverse perspective.

The panel met in December 2013 and was tasked with providing recommendations on a series of non-regulatory questions vetted by CDFA.

Among the many questions answered in the report, here are a few:

If you have any questions or concerns, please do not hesitate to contact the Citrus Program Manager, Victoria Hornbaker at 916-654-0317 or via email at Victoria.Hornbaker@cdfa.ca.gov.