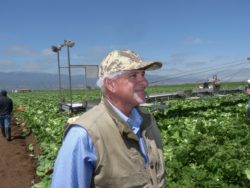 Steve Scaroni, along with his wife Brenda, owns Fresh Harvest, a premier labor provider, staffing and harvesting company for the agricultural industry in the western United States.

“Expansion for Fresh Harvest is coming, but the main emphasis is crops related to salads. They even expanded into citrus last year,” Scaroni said.

Fresh Harvest has also expanded into pears. Vegetables are the heart and soul of Fresh Harvest.

“Anything that goes into a salad, a lot of lettuce, romaine, broccoli; we touch a lot of salads every day,” he said.

Scaroni explained that the H-2A gets legal workers to serve his customers demands for the services he offers. A majority of the demands are labor and harvesting, along with other farm services.

“We’re bringing up 100 irrigators this year to put throughout the Salinas Valley because our Salinas customers can’t get enough irrigators,” he said.

Laborers that show great work ethic will be able to work for a longer period of time. A worker could technically stay if moved from contract to contract.

“If the timing works, he gets up to three years, but then he has to go back for 90 days,” Scaroni said.

H2-A is Heart of One Farm Labor Contractor

H2-A employees are the heart of one major farm labor company. Steve Scaroni owns Fresh Harvest, a premier labor provider and staffing and harvesting company to the agricultural industry and the western United States. But the company’s main emphasis has always harvested crops related to salads; they have also expanded into permanent crops.

“Last year, we started citrus and pears, and we will continue to expand in vegetables with anything that goes into a salad, lots of head lettuce, romaine, and broccoli, which is what we have been doing for a long time,” Scaroni said.

And then we touch a lot of salads every day. The H2-A temporary agricultural program allows agricultural employers when anticipating a shortage in domestic workers to bring non-migrant foreign workers to the US to perform agricultural services for a temporary or seasonal nature.

“If it wasn’t for H2-A, I wouldn’t be in business. I mean that’s the only way to get a legal worker into California to serve my customers demands for the services we offer, which is mostly labor and harvesting,” Scaroni said.

“And we’re even starting to do a lot of farm services. We’re bringing up 100 irrigators this year to put throughout the Salinas Valley because our Salinas customers can’t get enough irrigators,” he said.

Being a labor contractor has its difficulties. It takes a lot of work. It’s a very bureaucratic process-driven application process.

“Laborers that show great work ethic will be able to work for a longer period of time. A worker could technically stay if I can move it from contract to contract, and I can keep the temporary employee for three years,” Scaroni said. “But then he has to go back for 90 days, but it’s very hard to time the contracts for that to work.”

“So most guys, they’ll do five, six, seven months. They’ll go home before they can come back. And then the guys that are really good workers with and a great attitude and really get it done for us. We’ll move to another contract. Will even retrain them in a different crop if they have the right attitude and work ethic,” he said. 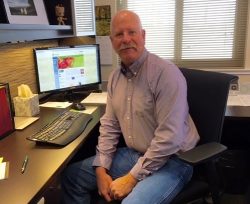 California ag leaders hoped that Governor Brown would see how the AB 1066 overtime bill would actually hurt farmworkers and veto it. Now that the Governor has signed it, the following ag leaders weigh in on AB 1066 consequences: Norm Groot, executive director of the Monterey County Farm Bureau; Bryan Van Groningen, field manager for Van Groningen & Sons Farms; and Anthony Raimondo, a Fresno-based attorney who has been representing farmers and farm labor contractors for over 15 years, among them.

Norm Groot anticipated, “The end result of AB 1066 is a big move to mechanized harvesting, which probably means a change in some of the crops that we’re growing here simply because currently we can’t harvest lettuce or strawberries or some of the other vegetable crops by mechanized means. Lawmakers are forcing the hand of the growers to move into crops that are less labor intensive and thus, save the [labor] cost,” said Groot.

Groot noted the inaccurate AB 1066 assumption—that an increase in overtime hours and pay will result from its passage. “We will probably see their hours cut back to the eight hours a day and forty hours per week,” he explained, as stipulated in the law. “Growers will adjust their planning schedules to the amount of laborers that they think they have available for harvest. It’s not an automatic given that we’re going to see all these paychecks increase, simply because we’re putting overtime at more than eight hours a day or after forty hours a week,” Groot said.

Groot added that farmworkers are not in favor of losing 33% of their income at this point. “I think overall, the unions have been supportive of this particular change, but the unions do not represent the majority of the laborers or field workers at this point,” he said.

“I think if you were to ask the average field worker whether he wants to work ten hours a day and sixty hours a week, he would probably say yes. Field workers want that income. They know they work in a seasonal business; they have to earn their income when they can,” he explained.

“Our farmworkers, our employees, love to put in the extra hours because this is the time that they’re making wages. Our company is accustomed to paying overtime if that’s what it requires,” said Van Groningen, “and the majority of our workers are already satisfied with the existing compensation structure.”

But Van Groningen noted the problem lies in what is considered overtime. With a shorter workday, overtime compensation rates will kick in much earlier than in the past, which will end up being a tremendous cost to the employer. “That’s going to cause our farm to mechanize a little bit more to try to get through the harvest more bit quickly because [the cost] is going to become too big of a burden,” he said.

Growers want to help their employees as best they can, but Van Groningen predicts reduced hours may become a necessity. “It’s just smart business. We don’t want to cut hours, but if we’re forced to because our bottom line is starting to become an issue, that’s what we’ll have to seriously consider,” he said.

Anthony Raimondo foresaw the effects of AB 1066 could put California at a disadvantage in the global marketplace. “At the very least,” Raimondo said, “employers will be forced to evaluate where they can cut production costs.”

“The increased overtime in some industries is going to drive automation,” said Raimondo. “So you are going to lose jobs because now it’s worth it for people to do the research and development to have more automation, more machine-harvested crops and less labor.”

Raimondo also expects some employers to add more H-2A temporary agricultural guest workers to make sure hours stay low enough to prevent their costs from increasing. “In the end, this is really going to cost farmworkers in terms of their real wages and it creates a massive economic disadvantage for California’s agricultural industry,” he said.

Policies like AB 1066 become increasingly problematic as the global agricultural industry continues to become more competitive. “Increasingly, agriculture has become a global marketplace in which we compete against countries that do not maintain the same labor standards nor the same environmental standards that we maintain, so our agricultural industry continues to remain at an economic disadvantage with the rest of the world,” noted Raimondo.