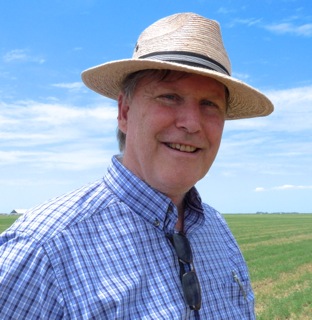 Dan Putnam is a faculty member and Cooperative Extension specialist at UC Davis with a statewide responsibility for alfalfa and forage crops. He said there has been an increased interest in subsurface drip irrigation in alfalfa, which is usually flood-irrigated. Alfalfa is a key forage source for the state’s top agricultural product, dairy, to the tune of more than $7 billion per year.

“It does come with some challenges,” but he said, “the growers who have really treated this as an educational experience are continually learning how to manage this system; not only the gophers, but the irrigation management component as well. To establish a crop with drip irrigation, growers need to plant in early fall and use sprinklers to germinate the seeds. A lot of growers fail on agronomic issues, like not planting at the right time of year rather than on drip irrigation issues,” Putnam said.

Putnam noted that growers are more interested in learning about subsurface drip irrigation because of increased yields. “I think over time, we are going to see a greater adaptation of this technology in California,” Putnam explained, “particularly in areas that have very high yield potential. For example, in the San Joaquin Valley and the Imperial low desert areas where the crop is actually capable of 12-16 ton yields, our yields average about 7-8 tons per acre. And so,” he added, “we do have a yield potential that we are unable to achieve, and part of that is in the limitation of surface irrigation.”

Putnam also noted one advantage of drip irrigation is efficient nutrient delivery, which in turn fosters increased uniformity across the system. “Growers can ‘spoon-feed’ the crop rather than inefficiently apply it on the surface,” stated Putnam. “I think a lot of growers have figured this out, although alfalfa does not have a nitrogen issue. Nevertheless, we have to apply significant phosphorous, potassium and several other nutrients in some deficient soils.”

As with most things, there are drawbacks, and Putnam outlined two. “One is an increased cost of the drip line and filtration system,” Putnam said. “Growers who are considering subsurface drip need to wrestle with the cost to be sure they can increase yields enough to justify the cost. In most cases, growers have been able to substantially increase yields in their systems to pay for the $1500-2500 per acre upfront investment in the technology,” he said.

“The other drawback is maintenance,” Putnam continued, “particularly with regard to rodent infestations. We’ve seen gophers, in particular, ground squirrels and meadow voles absolutely devastate drip-irrigation fields. As our vertebrate pest specialist at UC Davis says, ‘It is essentially an ideal habitat for gophers as they have plenty of food, plenty of shelter, plenty of water, and they are able to reproduce pretty readily.’ ”

“You should consider this system only if you are willing to accept a very high level of maintenance and no tolerance for rodent infestation because, if left unchecked, they will chew on the tapes and ruin the system,” he said.

Putnam reported there are strategies to get around gophers and other rodent issues, “You have start clean and do some deep tillage. We also recommend  retaining the capability of flood irrigation in those fields to use once in a while because it reaches the furrows very effectively,” he noted.

For those gophers, Putnam recommends every trick in the book. “There are traps organic farmers are able to use, flood irrigation, and boxes to help control the population,” Putnam said. “There are products available for baiting and other types of control measures that should be used. It is really too expensive a system to allow the gophers to have their way with it, so we need to have a high level of management,” he concluded.