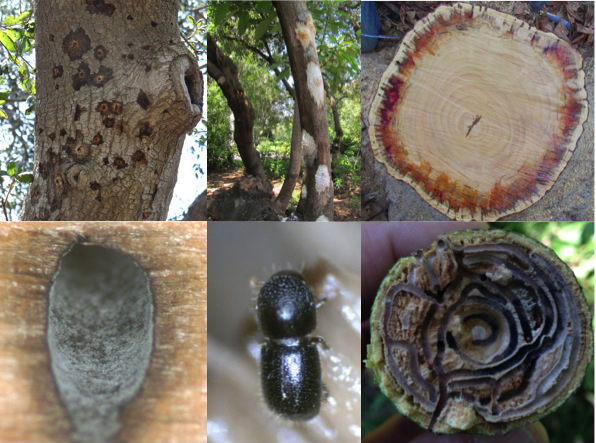 Recently  a new beetle/fungal complex was detected on avocado and other host plants in Los Angeles, Orange and San Bernardino Counties. The two fungal species are  Fusarium euwallaceae and Graphium sp., which form a symbiotic relationship with a recently discovered beetle that is commonly known as the polyphagous shot hole borer (PSHB, Euwallacea sp.)

Together, they cause the disease Fusarium dieback (FD). When the beetle burrows into the tree, it inoculates the host plant with the fungus (Fig. D), which is carried in its mouthparts in a structure called mycangia.

The fungus attacks the vascular tissue of the tree, blocking the transport of water and nutrients from the roots to the rest of the tree, and eventually causing branch dieback. The beetle larvae live in galleries within the tree and feed on the fungus.

FD has been observed on more than 110 different plant species in California, including many species common in urban landscapes and on such agriculturally important species as avocado, olive and persimmon.

Symptoms:  Each host species shows different symptoms depending on the response to infection. Sycamore, box elder, maple, red willow, and castor bean are good trees to search for signs and symptoms of the beetle, as it tends to prefer to infest these hosts first. Depending on the tree species attacked, PSHB injury can be identified either by staining, gumming, or a white-sugar exudate on the outer bark in association with a single beetle entry hole.

Who to contact if you find the problem: If you suspect that you have found this beetle or seen symptoms of the Fusarium dieback on your tree please contact either your local farm advisor, pest control advisor, county Ag Commissioner office or Dr. Akif Eskalen by either phone 951-827-3499 or email at akif.eskalen@ucr.edu.