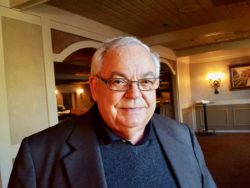 California Ag Today recently had an exclusive interview with Fred Franzia the CEO and co-founder of one of the biggest wineries in the nation, Franzia Winery, which is the maker of the famous Two Buck Chuck sold in Trader Joe’s. We asked him how it all started.

“My Grandfather came to America in 1893, arrived in Ellis Island, went to San Francisco, eventually got into the Lodi/Linden area. He saved enough money to buy his first ranch in an area between Ripon and Manteca in an unincorporated community called Atlanta, and that’s where he started with 80 acres – the place where Franzia Winery is today,” he said.

Franzia said the major factor in the U.S. wine industry is the San Joaquin Valley where 76 of the total wine grapes in California are produced.

“There wouldn’t be a wine business in the U.S. if it wasn’t for the San Joaquin Valley. It’s as simple as that,” according to Franzia.

And he explained the reasons behind that pronouncement.

“We have all the right varieties, and they’re priced right, so the consumer can afford to buy them every day and enjoy it. That’s what we’re trying to do with the wines,” he said.

And there is a misnomer among some consumers that quality wine cannot be produced in the San Joaquin Valley.

“All they have to do is have blind tastings with any wines they want, and we’ll win nine out of 10,” Franzia said.

And Franzia Winery, which also owns the Bronco Wine Company, produces a lot of wine.

“We have close to 150 labels. The most famous one, I think, is the Charles Shaw, which is one of the best selling products ever sold at Trader Joe’s. And that wine is affectionately known as Two Buck Chuck,” he said. “It’s sold over a billion bottles so far, so we’re into that one pretty heavy.”

We asked Franzia why Two Buck Chuck is so popular? Of course, we know it’s got a good price and the quality’s there. “Can’t say it any better,” Franzia said.