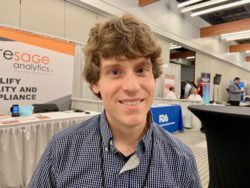 Researchers Hone in on Bacteria Genome to Isolate Pathogens

Food safety is paramount in the specialty crop farm industry; but when a bacterium causes a food safety problem, there is important work to determine the exact fingerprint of that bacteria.

Matthew Stasiewicz, assistant professor of applied food microbiology in the area of food safety at the University of Illinois at Urbana-Champaign, Department of Food Science & Human Nutrition, said it’s important to determine the genome of these bacteria that are causing problems.

“The biggest thing that has happened in the field of food safety is that the U.S. government has committed to using whole genome sequencing as a primary public health surveillance tool. So, if you have a foodborne disease and go to a doctor, and they isolate that organism, it will go into a nationwide database—now international database—that can link that organism’s genome sequence to whatever else shows up in the database. So, at the same time, if pathogens are isolated from foods potentially as part of an outbreak, those sequences can be [entered into the database] and [experts can] gather information from food sources as well as clinical patients. And that’s just a major tool.”

Stasiewicz said the genome is important because we need to know the true source of that bacteria. “The pathogens that can make you sick can be distributed in the environment.

“So just because you potentially got sick from eating food and maybe you got an E.coli O157:H7 infection in your hometown, even if someone else two towns away got the same infection with E.coli O157:H7, we don’t know if that’s related, even if you potentially ate the same food,” Stasiewicz said. “That could come from the soil in your town, your local grower, a local grower somewhere else, or from a common source, common grower, or common packer, and gotten you both sick. This genome sequence information allows us to make those links much more clearly.” 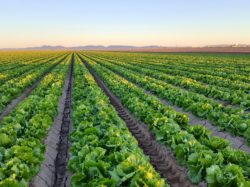 Recently, the U.S. Food & Drug Administration released an environmental assessment that provides an overview of factors that potentially contributed to the contamination of romaine lettuce with E. coli that was implicated in a 2018 multi-state foodborne illness outbreak. The assessment can be found here and includes the background on the outbreak; the environmental team approach; and factors potentially contributing to the introduction and spread of E. coli; along with recommendations for the prevention E. coli in leafy greens.

FDA recommends that growers and processors of leafy greens:

The findings in the Environmental Assessment appear to provide little new information but will be closely reviewed by Western Growers and others as part of our industry’s ongoing efforts to ensure food safety.

Immediately after the outbreak, Western Growers collaborated with the leafy greens industry to help lead a task force that would assess the source of the outbreak, as well as develop recommendations to prevent future outbreaks. While sources of contamination remain uncertain, the task force made concrete recommendations to industry for assuring water is safe and adequate, assessing and mitigating risk from adjacent land uses as well as others to address risks from equipment and climatic conditions.  These recommendations go well beyond the requirements of the FDA’s own Produce Safety Rule and have already been incorporated into the California and Arizona LGMA requirements. State auditors are now charged with verifying adherence to these new controls through announced and un-announced audits that occur throughout the seasons. The industry is furthering its efforts to learn more including through research guided by respected entities such as the Center for Produce Safety and working directly with California and Arizona academic teams. There is a strong and broad commitment to continually work to improve our food safety system. 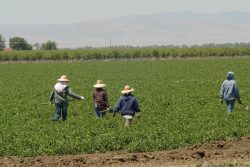 “LGMA has partnered with a group called Stop Foodborne Illness, a national nonprofit, public health organization dedicated both to the prevention of illness and death from foodborne pathogens and to its victims. These two groups collaborated to create a video that is used in all training workshops. The video not only tells them why food safety is important, it shows them.”

On their farms, growers are active stewards of the land, protecting soil quality and water quality as well as supporting wildlife by preserving their habitat. At the same time, fresh produce growers must ensure that their crops are free from pathogens that can cause foodborne illnesses.

To help growers and food safety professionals achieve all of these important goals, UC Cooperative Extension (UCCE) has launched a free online course.

“For example, cover crops attract beneficial insects, help control soil erosion and improve soil quality, but they may attract wildlife,” she said. “In the course, we demonstrate frank conversations between food safety auditors and growers about strategies for minimizing the potential risks of crops being contaminated by animal feces. Growers can often provide existing examples, such as monitoring programs or temporary fencing that excludes wild and domestic animals from produce fields.”

The course also provides growers with tools to evaluate their strategies for managing food safety and sustainability.

“After the training, growers and auditors will be better prepared to engage in realistic and frank discussions of co-management strategies used in crop production” Bianchi said.

This project was funded by a $39,650 grant from the University of California Division of Agriculture and Natural Resources.

A video describing co-management practices from farm to fork can be viewed online at “Co-Management of Food Safety and Sustainability in Fresh Produce“. 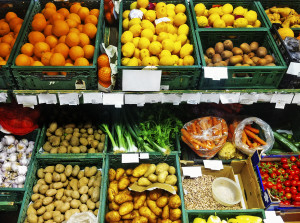 Chances are when you’re scooping that vanilla bean ice cream into your bowl for dessert, you’re focused on the flavor about to hit your taste buds, not on whether it may give you a foodborne illness.

That confidence in the safety of California’s dairy products  — the state’s top agricultural commodity, valued at nearly $7 billion in annual retail sales — results in part from the efforts of the San Bernardino branch of the California Animal Health and Food Safety laboratory system.

This network of laboratories, headquartered at UC Davis and administered by the UC Davis School of Veterinary Medicine on behalf of the California Department of Food and Agriculture, performs surveillance and diagnostic testing for livestock and poultry.

The San Bernardino laboratory carries out such work on milk and dairy products that are submitted by the state’s Milk and Dairy Foods Safety Branch. The lab’s on-site bacteriology section tests for a variety of disease-causing microbes including  Listeria, Brucella, Salmonella, Campylobacter and E. coli O157:H7 — all of which can cause severe illness and even death.

The U.S. Centers for Disease Control and Prevention estimates that each year roughly one in six Americans (or 48 million people) get sick with a foodborne disease.  Of these, 128,000 are hospitalized and 3,000 die from these illnesses.

However, such diseases have almost been eliminated from licensed milk and dairy products, thanks, in large part, to a strong regulatory framework, including adherence to pasteurization and laboratory standards.

Approximately 1,500 samples of milk, dairy products and water arrive monthly at the San Bernardino lab resulting in approximately 4,200 tests conducted by a team of eight technicians. These microbiological assessments monitor bacteria populations and the effectiveness of pasteurization in destroying harmful bacteria.

“The laboratory system has been a successful partnership between the state and UC Davis since 1987,” said its director, Richard Breitmeyer.

He noted that it was natural in the 1990s to expand the lab’s statewide regulatory testing services to include milk products. Before then testing was limited to samples from only Southern California.

In 2000, the California Department of Food and Agriculture was so impressed with the accuracy and timeliness of the California Animal Health and Food Safety laboratory system that it placed all such statewide regulatory compliance testing in the network of labs, in a move that  enabled the state to cut costs, speed analysis and consolidate testing.

Three years ago, the state asked the laboratory system to also begin testing  milk and dairy products for chemical components such as fat and protein content. The San Bernardino lab now provides this service.

“I’m proud of our efficiency,” says Jose Gallegos, the San Bernardino lab’s supervising dairy analyst, who has been with the laboratory system for 20 years and oversees the milk quality testing lab. “Results are rapid and consistent, and reduce the number of people who become ill in the event of an outbreak.”

The San Bernardino laboratory is considered the state reference lab for California and holds the distinction of being the only veterinary facility in the nation set up as a regulatory testing facility. In addition to running tests for the state, the laboratory also is certified by the U.S. Food and Drug administration, under the National Conference of Interstate Shippers program guidelines to run microbiological tests.

As part of this testing program, the state sends samples from three sources: the farm, processing plants and retail establishments where the finished product is sold. The lab also tests some exports such as ice cream for microbiological components and dry goods such as powdered milk.

State milk and dairy officials may submit samples from a location if a report comes in that someone has become ill after eating or drinking at a particular business. State and federal investigators also routinely check farmers markets and small establishments for raw or illegally processed milk and dairy products that could pose a serious health risk. Those products are sent to the San Bernardino lab to be tested for the presence of bacteria or improper pasteurization.

Samples sent to the lab must be transported at the proper temperature, arrive within 60 hours of collection and be properly packaged before they are tested for general bacteria populations. If the testing criteria aren’t met, those samples are rejected for testing and reported to the state for recollection. Any test results indicating the products were not produced in compliance with state regulations are reported to the California Department of Food and Agriculture, which is authorized to enforce the regulations.

After milk samples have been analyzed for bacteria and other indicators of improper sanitation at a facility, they move on to be tested for drug residue and other unwanted substances such as antibiotics, which may have been used to treat sick cows.

Farmers are required to keep milk out of the supply line until the medication has cleared from the cow’s system and the milk meets strict requirements established by the FDA. Other testing, such as checking for proper pasteurization and possible water contamination, complements the tools used by state officials to ensure the quality and safety of the milk supply.

“We’re always looking at developing better tests and working with our partners to provide the highest level of service,” Gallegos says. “Knowing all the quality testing processes in place, I feel great about drinking milk!”

CAHFS is a public service program of the university. The primary objectives of the CAHFS are to provide appropriate and timely diagnostic support to safeguard the health of California’s dairy, livestock and poultry industries and to protect the public health from animal disease.