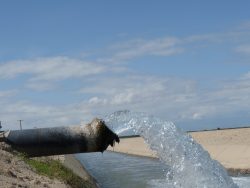 Pauli was one of many that interviewed at the California Farm Bureau Federation’s 98th annual Conference in Monterey earlier this month.

“During that period, I was heavily involved with CALFED and the Delta issues, which are so important to us and for which we’re seeing the issues today with the Delta and water supply and water management and availability,” Pauli said.

CALFED was created because of the importance of the Delta to California. The majority of the state’s water runs through the Delta and into aqueducts and pipelines that distribute it to 25 million Californians throughout the state, making it the single largest and most important source of water for drinking, irrigation and industry.

“I was also involved in a lot of the worker compensation issues, because when Governor Schwarzenegger came in, that was the big issue, or rates and what we were paying. That was always the important issue for me. We had all the other issues related to labor over that period of time, along with the environmental issues that continue to expand.

It’s not news that California Farm Bureau carries the water for almost all the other farming organizations in many ways noted Pauli.

“The thing that’s so unique about the California Farm Bureau, and our county farm bureaus in every county of the state, is that we represent all of agriculture.

CFBF represents 450 different commodities for the individual grower all the way down to the local ag level in California.

We have the big, broad-picture issues, but there’s also the local issues that are so important to the individual producer,” Pauli said.

“We currently serve students in 10 California counties, seven sites throughout the state, and because agriculture is becoming such a key issue in California and more people are becoming interested in farming practices, knowing where their food comes from, and how it’s grown,” said Christine McMorrow, FARMS Leadership Program Director.

McMorrow said, “Our primary goal is to get high school students out on farms and ranches, into Agri-businesses, learning about jobs in agriculture, especially jobs that go beyond production agriculture. Those jobs that involve science, technology, engineering, and math,” said McMorrow.

She said the best way to enable those students to know what all the different jobs in agriculture is to get them to where the work is happening.“We give them opportunities to do work on these farms and in these businesses. We also make sure they have plenty of opportunities to speak with people working there and find out how they became interested in agriculture and how they got to where they are today,” said McMorrow.

For more information the program, go to the FARMS website. If you represent an agricultural company that needs good qualified help, go to the Center for Land-based Learning website for contact information.

The Center for Land-Based Learning, dedicated to creating the next generation of farmers and teaching California’s youth about the importance of agriculture and watershed conservation, is getting ready for it’s third California Farm Academy class beginning in February 2014. The Farm Academy still has a few spots available.

The California Farm Academy, a one-of-a-kind beginning farmer-training program, was established to inspire and motivate people of all ages, especially youth, to promote a healthy interplay between agriculture, nature and society through their own actions and as leaders in their communities.

The program provides approximately 270 contact hours from Feb. 11th to Sep. 13th, 2014, including classes, hands-on experience, one-on-one consultations, farm visits and field trips. Printed curriculum materials are provided, as are the necessary machinery, tools and supplies for the activities. Partial tuition assistance may be available for admitted applicants who demonstrate financial need.
Another CLBL program, FARMS (Farming, Agriculture, and Resource Management for Sustainability) Leadership Program, provides innovative, hands-on experiences to urban, suburban and rural youth at working farms, agri-businesses and universities. Participants develop leadership skills and learn about agriculture practices that contribute to a healthier ecosystem, and connect to agricultural, environmental, and food system careers.
CLBL envisions a world where there is meaningful appreciation and respect for our natural environment and for the land that produces our food and sustains our quality of life. CLBL Founder, Craig McNamara was awarded the 2012 James Irvine Foundation Leadership Award. He is also President, California State Board of Food and Agriculture.