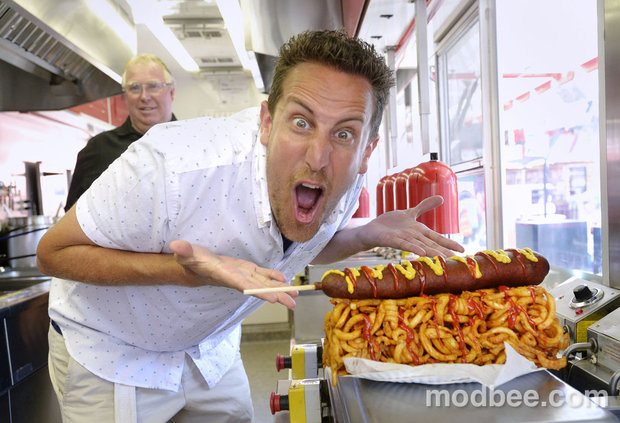 By: Nan Austin; The Modesto Bee

Some fairgoers came for the barbecue, washed down with beer floats. Others lined up for deep-fried, bacon-wrapped pickles, cheesecake on a stick or a dozen forms of fried potatoes.

But it’s lobster corn dogs, doughnut sandwiches, deep-fried frogs legs and a mega loaf of curly fries that will be the most memorable morsels of this year’s Stanislaus County Fair, thanks to a Food Network episode of “Carnival Eats” that filmed in Turlock.

“Vegas has its secrets. The fair has its calories. It’s the guilty place you go once a year,” said host Noah Cappe between takes Saturday. The show has crisscrossed the country since April, filming Cappe gamely learning to cook everything from gumbo in Louisiana to deep-fried rattlesnake in Oklahoma.

“I appear to be a slow learner. But I’m definitely getting comfortable around the friers,” Cappe said with a grin.

“It’s silly. The guy can barely slice an onion, but he loves to eat,” said show director Spencer Ramsay while his crew set up cameras at the Monster Grill.

“Setup takes a couple of hours,” he noted. “That’s always what takes the time.”

Outside, cameramen taped a black cloth hood around a window in front of the main cooking area to block reflections. One camera would be shooting there while two others stood inside with Ramsay to capture Cappe’s foray into monster corn dog and curly fries cooking. Each item is cooked at least twice, giving a variety of wide-angle and close-up views to be stitched together later.

“It’s a huge process,” said producer Topher McFarlane. The Monster Grill trailer, which has a second trailer attached with walk-in refrigerator and office space, is one of the larger venues they’ve filmed, he noted. Filming inside tents and tiny booths each take their own engineering for lighting, sound and camera angles.

During filming, Cappe’s slim, 6-foot-3-inch frame swiveled expertly to stay in the photo frame as owner Tom Stroud maneuvered bulky packages and oversize equipment in the small space. The booth can run through 14 tons of potatoes in one fair, Stroud said.

Stroud’s 18-inch corn dogs and 5-pound serving of curly fries, both $8 items, were the menu for his segment. It takes custom-built, extra-deep deep-fry bins to cook both. The corn dogs take custom-cut sticks because of their weight, Stroud said. Some people share the mega meal, others dive in alone, he said.

“You get people trying to outdo each other. It’s really comical,” he said.

On Saturday the crew also filmed Cappe making lobster corn dogs that sell for $10 at Sharky’s Fish Fry, owned by two generations of Delahoydes. Phillip Delahoyde said his dad invented the batter-fried lobster sausages and lobster fries to be featured on the show. Other quirky offerings include deep-fried avocado and, at another booth, a chicken sandwich made with raspberry-jelly-filled Krispy Kreme doughnuts.

“If we had to think about calories, that would be scary,” Delahoyde said with a laugh.

Sacramento’s Cal Expo and the Stanislaus fair will be the California contributions for the first season of “Carnival Eats,” due to start mid-August on the Cooking Channel and Great American Country in the United States, and the Food Network in Canada. The show will mix and match locations, making Turlock’s air date a toss-up right now, Ramsay said.

The fair has a week still to run, giving fairgoers a chance to taste the real thing and dozens of other only-at-the-fair foods.

At the Knights of Columbus booth, volunteers in red T-shirts that say “Keep Calm and Eat Linguica” will be fundraising for scholarships and extras for Sacred Heart School. After more than 60 years of selling linguica sandwiches, they’ve added a linguica corn dog, french fries and sweet potato fries this year, said volunteer Kevin Crivelli.

“We’ve had people try it that don’t drink beer and love it,” Gonsalves said.

Doughnuts are big sellers throughout the fair, even showing up as stuffed toys winnable at games along the midway. Castle Mini-Donuts offers a doughnut sundae, eight doughnuts topped with whipped cream, chocolate or caramel sauce and a cherry on top, said worker Jackie Barrera.

Fried bread has been dubbed “elephant ears” at one booth offering a number of toppings. An Indian Fry Bread booth has s’mores bread, a fry bread dribbled with melted marshmallows and chocolate sauce.