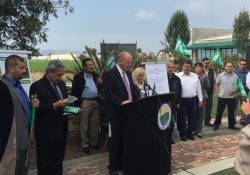 Monterey County Agricultural Commissioner, Eric Lauritzen and the Farmworker Advisory Committee, formed with the assistance of the Center for Community Advocacy (CCA), announced an historic initiative TODAY aimed at providing additional pesticide protections for farmworker safety. The initiative launches a pilot program with leading growers to enhance worker notification through warning signs when pesticides are used in the fields.

“California has the toughest farm pesticide restrictions in the nation, and Monterey County already imposes local rules that further protect farmworkers,” said Lauritzen at TODAY’s press conference. “But we are going to do even more to communicate our commitment to safety in the fields.”

“We are excited about this initiative that adds an additional element of protection for farmworkers by providing the time and date when it is safe to reenter the fields that require posting,” said Lauritzen. “Farmworkers are the backbone of Monterey County’s $4.8 billion Ag industry, and they are entitled to the highest standard of pesticide safety.”

Additionally, every farmworker in Monterey County (approximately 50,000) will receive a business-card-sized information card (in Spanish) advising them to call the Agricultural Commissioner’s Office if they suspect violations of safety rules. The cards also advise employers that it is illegal to retaliate against farmworkers who seek the help of the Agricultural Commissioner’s Office.

If you have questions or complaints on pesticides, the Monterey County Agricultural Commissioner’s Office will help.

The card includes phone numbers and advises workers that state law also protects them against retaliation if they report a pesticide problem.

Currently, regulations for posting pesticide warning signs do not require information indicating the date or time when it is safe for farmworkers to re-enter the fields. The pilot program will include the addition of one sign that will be prominently marked with a red flag and include the date and time that the law allows workers to safely reenter the field. Only the grower or his/her officially designated representative may remove the signs, after first showing the crew leader proof that the re-entry restrictions have expired.

Osvaldo Cisneros, a lettuce worker and member of the Farmworker Advisory Committee, feels that the change is very important. “Some farmworkers have been showing up for work and have been told by their mayordomos (supervisors) to re-enter fields even though warning signs are still up,” said Cisneros. “They have to depend on the word of the mayordomos even though they have no way to verify what they are told. This change will allow farmworkers, themselves, to tell when it is safe to enter fields.”

The posting and information card initiatives were developed in cooperation with the Farmworker Advisory Committee, a group formed jointly by Lauritzen and the non-profit Center for Community Advocacy. “Many farmworkers are unaware of their right to a safe working environment,” said CCA Executive Director Juan Uranga. “That’s why it is important to provide farmworkers with the information they need to both protect themselves and also gain access to the agencies, like the Monterey County Agricultural Commissioner’s Office, that exist to protect them.”

A second member of the Farmworker Advisory Committee, Maria Elena Andrade, added: “It is important for our community to know that the Agricultural Commissioner’s Office exists to serve us, as well as the other parts of the agricultural industry. We are trying to create that message through the Farmworker Advisory Committee, even as we work with the Ag Commissioner and his staff to improve safety for farmworkers.”

Growers involved with the initiative include Sea Mist Farms, Tanimura & Antle, Bayview Farms, Scheid Vineyards and Costa Family Farms. Lauritzen recognized these leading growers for their, support, innovation and dedication in their effort to provide additional protections for farmworkers.

Lauritzen briefed officials at the state Department of Pesticide Regulation (DPR) on the pilot warning sign program and the information card campaign. DPR Director Brian Leahy praised the Monterey County initiative. “We all know that farmworkers are the most vulnerable population in terms of potential exposure to pesticides,” said Leahy. “When we protect farmworkers more effectively, we also enhance protection for the environment and the community at large. This initiative represents an important step forward for farmworker safety, and it underscores California’s leadership in environmental protection.”

The accord reached two years ago between the Office of the Monterey County Agricultural Commissioner, the agency that oversees pesticide regulations and other worker safety matters, and the Center for Community Advocacy (CCA), a farmworker advocacy group, established the Farmworker Advisory Committee for the Office of the Agricultural Commissioner of Monterey County—the first of its kind in the State Of California.

Most Californians surveyed say the statewide drought has had little or no impact on their daily lives, and a majority oppose the suspension of environmental protections or large-scale public spending to boost water supplies, a new USC Dornsife/Los Angeles Times poll has found.

Although 89% characterize the drought as a major problem or crisis, only 16% say it has personally affected them to a major degree.

Despite widespread news coverage of the drought — one of the worst in recent decades — the state’s major population centers have largely escaped severe mandatory rationing. Even agriculture, which as California’s thirstiest sector is inevitably hit the hardest by drought, has partially compensated for reduced water delivery by pumping more groundwater.

That has softened the drought’s effect on many, apparently blunting the desire for drastic remedies and big spending on water projects.

While Central Valley congressmen and some agribusiness interests have blamed environmental regulations for worsening the water shortages, those polled cited a much broader range of causes. Topping the list was a lack of rain and snow and people using too much water, followed by insufficient storage and climate change.

“They’re really blaming larger forces here,” said David Kanevsky of American Viewpoint, the Republican firm that conducted the opinion survey with Greenberg Quinlan Rosner Research, a Democratic firm. “What they don’t want to see is quick fixes at the expense of the environment.”

But when it comes to paying for the projects, the numbers flipped. Only 36% want to improve storage and delivery systems by spending taxpayer dollars.

“As soon as you inject spending into it, support dries up,” said Drew Lieberman of Greenberg Quinlan Rosner.

Pollsters conducted the telephone survey of 1,511 registered California voters from May 21 to May 28 for the USC Dornsife College of Letters, Arts and Sciences and the Los Angeles Times. The margin of error is plus or minus 2.9 percentage points.

A large majority of those surveyed, 87%, said they were trying to save water by taking shorter showers, flushing toilets less frequently and making other changes in their domestic routines. Two-thirds say they are watering their lawns less, and roughly a quarter say they’ve ripped out lawns and replaced them with drought-tolerant plants.

Generally speaking, people in all parts of the state were taking steps to reduce domestic water use. But regional differences surfaced when people were queried about solutions.

Coastal areas favored mandatory 20% cuts in water use more than inland regions. In Southern California, 45% of those surveyed said water rates should be increased to promote conservation, compared with 56% in the Bay Area and slightly less than a third in the Central Valley.

“If they have to raise the price of water … I think it will encourage people to use less of it,” said Erika Hart, 23, a college student who lives in an apartment in Fontana.

A biology major with independent political leanings, Hart also opposed suspending environmental regulations. “I believe we should do more as a community to limit our water usage before we go and affect the wildlife around us,” she said.

A sharp partisan divide surfaced over the role of climate change, with 78% of Democrats saying it was very or somewhat responsible for water supply problems, compared with 44% of Republicans.

“I don’t believe in climate change,” said Republican Steve Bennett, 60, a contractor who lives in Martinez. “This is a semiarid state. I don’t know when it’s going to sink in — but we have real wet winters and then we have dry periods, and it’s been that way forever.”

Democrats and Republicans differed to a lesser extent on whether environmental protections for fish and wildlife should be suspended in response to water shortages. Overall, 55% of voters said no, as did 56% of Democrats, compared with 45% of Republicans and 64% of those who didn’t align with a party.

Those results suggest a bill passed by the GOP-controlled U.S. House and headed to a House-Senate conference committee is out of sync with a majority of the state’s voters. The legislation would roll back federal fish protections to increase delivery of water in California. But of 11 different water-supply solutions in the opinion survey, easing environmental regulations was the only one opposed by more than 50%.

Photos and newscasts about shrinking reservoirs and dusty cropland have also apparently failed to boost voter willingness to open the public wallet for water projects.

Reluctance to spend taxpayer dollars on water supply was found across the political spectrum. Whether Democratic, Republican or independent, fewer than 40% of those surveyed supported storage and delivery system improvements if they cost taxpayer money.

The numbers are largely unchanged from the results of a USC-Times poll conducted in September that gauged support for state borrowing to finance water-supply improvements. Legislators are now trying to hammer out a water bond to place on the November ballot.

“I think it’s trouble for passing a water bond,” Lieberman said, “if the ‘no’ side spends money” this fall.