Humboldt State University is among the northern-most hubs of the BlueTechValley Innovation Cluster. It’s part of the interconnection of multiple incubators, or entrepreneurship programs spanning the state serving 39 counties. The solid goal of the BlueTechValley initiative was established at Fresno State, and it’s all about managing water and energy resources in agriculture and other industries.

Lonny Grafman teaches in the Environmental Resources and Engineering Department at Humboldt State, and he’s also the Humboldt State managing director of the BlueTechValley hub there.

“It’s a new program, so that’s pretty exciting,” Grafman said. “BlueTechValley has had a lot of success in Fresno, and what we are is their far northern Californian north coast arm. So, we’re seeking to have the type of success that they’ve had in Fresno,” Grafman said. “Specifically, we’re looking for entrepreneurs, inventors, businesses that are working on agriculture, energy and water efficiency projects.”

The university is looking for entrepreneurs and startups that can address saving water and energy.

“Any start up that has the chance of saving California electric rate payers’ money, we want to talk to them and see if we have resources that could help them to bring their product to market. That is that sweet spot that we’re trying to fill, “Grafman said. 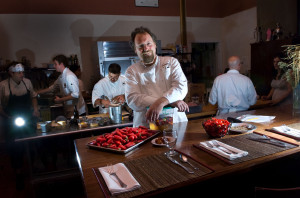 By Patrick Mulvaney, chef and restaurateur; The Sacramento Bee

As a chef, I have always believed that the completed dish will only be as good as the ingredients used. The bounty of the 12-month growing season is the main reason we decided to open our restaurant here in Sacramento. Because of our close relationships with local farmers, our “supply chain” is basically a truck and the farmer’s market. We can see how the drought has affected their crops.

Three years of drought have taken a toll on the ranchers and farmers we depend on. Lack of rain to refill the state’s reservoirs has reduced water levels to historic lows. Some water allocations have been cut entirely, and most farmers have been forced to scale back on planting. Forty-five percent of rice land went unplanted this year; farmers were forced to sell off cattle this spring. Researchers at UC Davis estimate that drought will prevent farmers from planting nearly 430,000 acres and cost the state $2.2 billion.

This isn’t just a Sacramento problem; it will affect the whole country. California grows nearly half of the nation’s fruits and vegetables, including 70 percent of the lettuce, 76 percent of the avocados, 90 percent of the grapes and virtually all of the almonds. Unfavorable conditions in California mean higher prices for restaurants across the country.

The U.S. Department of Agriculture said produce prices could increase 5 to 6 percent this year. Even though beef prices are at historically high levels, the drought has raised the prices of feed even higher, forcing ranchers to sell the majority of their herds. A few years ago, the U.S. had 102 million head of cattle. That number is now under 88 million and dropping. It’s the smallest herd since 1951, so prices keep rising.

In addition to drought, climate change is causing other kinds of severe weather swings. Last winter was unusually brutal in the Midwest, causing an almost complete failure of the cherry crop and raising doubts about harvests for the rest of the tree fruits this summer.

In some ways, we are lucky at my restaurant; our daily-changing menus have allowed us to respond to climate disruptions. And while we continue to serve the best of what’s coming out of the nearby land, some items have become harder to find at a reasonable price. During the past year, restaurants have changed their menus to reflect higher meat prices, sudden collapses in citrus yields and the lack of products as farmers are forced to let their land lie fallow.

I worry that extreme weather, like California’s drought, may become the new normal. Our agricultural partners face the greatest risks. Many businesses will experience climate change through limited supply and poor supply-chain quality.

There’s something we can do about this. California has long been a national leader on clean-energy policies. Gov. Jerry Brown is supportive of the Environmental Protection Agency’s new regulations that will reduce carbon pollution. He said, “Clean-energy policies are already working in California, generating billions of dollars in energy savings and more than a million jobs. Bold, sustained action will be required at every level, and this is a major step forward.”

Now is the time to continue California’s clean-energy leadership tradition by implementing changes that encourage business leaders to use resources more efficiently. This will help prevent more extreme weather events and make our economy more resilient.