A panel at the recent Food Safety of California Convention gave viewers a glimpse of hope for a brighter future in the industry. The moderator of the panel was Tom Jones, senior director of analytic sciences with the Safe Food Alliance.

Although important topics like food safety and processing were discussed by the panel, Jones found himself most impressed by the audience.

“The number of young people that are interested in agriculture and the food industry really gives you hope for the future,” he said.

Jones also said he was also pleasantly surprised by the implied support from Capitol Hill in Washington. “They are actually quite excited to be involved with agriculture. They think it’s an important or noble thing to be doing that job for their representative in Congress, which is a real shift from even a few years ago,” he explained.

The Safe Food Alliance was founded in 2016 as a sister organization to the DFA of California, a nonprofit trade association that has expanded beyond quality inspections to servicing new commodities. To find out more about the Safe Food Alliance and their services, you can visit their website here.

Standard is Parts Per Billion Today

California Ag Today recently spoke with Mark Mariani, executive chairman of the Mariani Packing Company in Vacaville and outgoing chairman of the Safe Food Alliance, which recently opened a new laboratory in Kingsburg to provide further research into food safety.

“We’ve been members since 1946, and the fact that the produce industry is self-policing is very unique,” Mariani said.

“The reason why we enjoyed the DFA and now the SFA is the fact that we are very concerned about food safety and so we are in a very unique industry in the sense that we self-police ourselves and so this is not something new. We’ve been doing it for over 100 years,” he explained.

“It’s not the new trend, and so being part of the DFA and SFA gives us the opportunity to not only look at the way we do our practices in our manufacturing practices, but also it gives us an opportunity to look at how we test our products,” Mariani said. “And back in the day, we used to be happy with one part per million detections of something. Today, we’re insisting on one part per billion.”

Mariani Served as Chair of the Safe Food Alliance

The Mariani Packing Company is one of the largest specialty crop growers and handlers in the state, packing many different types of fruit on a massive scale. California Ag Today recently spoke with Mark Mariani, executive chairman of the Mariani packing company in Vacaville and the outgoing chairman of the Safe Food Alliance (SFA), an organization specializing in food safety among growers, packers, and processers to maintain high standards of food safety and prevent consumer illness.

Mariani said that the products that they bring in from Mexico are held to the same standard as produce grown inside the United States. Consumers always look back at the supplier when it comes to food safety, so they ensure that standards meet or exceed the U.S. standards.

Mariani reflected on his part in the Safe Food Alliance organization.

“It’s an exciting time for DFA (which still stands as an entity as it’s being morphed into the Safe Food Alliance) because of the growth and the fact that it is offering so many more services to our members. We recognize that for us to move forward as an industry, we have to be better than anyone else and especially foreign competition,” he said. “And you do that because you can create trust, and I think there’s a solid brand with SFA ,if you’ve been approved and a member … that you are operating within the SFA conditions.”

As the former chairman of SFA, Mariani enjoyed working with passionate people.

“The individuals in the DFA and SFA are passionate people that want to do and exceed the expectations or their members. And most importantly, you want to provide safe food for consumers,” Mariani said.

The new Chair of Safe Food Alliance is Dane Lance, President and CEO of Sunsweet Growers, the world’s largest and most famous brand of dried tree fruits including prunes, apricots, and mangos. 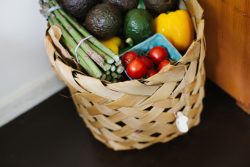