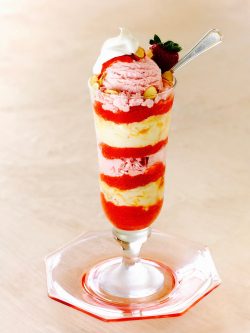 Jennifer Giambroni, director of communications, California Milk Advisory Board, explained why Californians, in particular, have so much to celebrate during National Ice Cream Month. “As the number one ice cream state,” she said, “we produce 126 million gallons of ice cream a year.”

California also leads the nation in milk production, and 99 percent of dairies in the state are family-owned. Including milk production on farms and milk processing, the California dairy industry, supports about 190,000 jobs in the California economy and contributed about $21 billion in economic value added in 2014, according to “Contributions of the California Dairy Industry to the California Economy,” by the University of California Agricultural Issues Center (May 14, 2015).

Ice cream, being both timeless and innovative, has evolved in flavors and varieties over the years, according to Giambroni, while still holding true to the traditional treat you grew up with as a kid. “Ice cream is an important category that represents a lot of the milk produced on California’s more than 1,400 family dairy farms and carry the Real California Milk seal,” she noted.

“We’re seeing adult-friendly milkshakes with the addition of spirits, ice cream sandwiches made with more than cookies, and sundaes with everything from balsamic vinegar reductions to red bean paste,” Giambroni elaborated. Other new ice cream trends include hyper-indulgent flavor combinations, including nuts and fruits grown in California, and “better for you” versions with probiotics, varying levels of fat and sugar, added calcium, lactose-free, and different kinds of oils. “We’re loving the olive oil and walnut oil ice creams for their subtle flavors,” Giambroni noted.

The California Milk Advisory Board works with bloggers on how to incorporate ice cream into events for children of all ages: