A strawberries survey connected to a project that looks at the future of strawberry genetics will soon be sent to strawberry growers.

Daniel Tregeagle, a postdoctoral scholar of agricultural economics at UC Davis, is working on the survey.

“This project is being run over the state of California, through a number of different institutions, different universities, including the state of Florida,” Tregeagle said. “Strawberry growers all over the country are trying to find out what we should be breeding in the next generation of strawberry cultivars.”

The project is part of a Specialty Crop Research Initiative, which is considering what growers are looking for in the next generation of strawberries, Tregeagle said.

“Do they want better yields? Do they want more attractive features that the consumers are going to like? Do they need disease resistance?” Tregeagle asked.

However, growers can’t have everything, because when a cultivar is strong in one area, they tend to be less strong in other areas.

“So what we’re doing in the survey is asking growers what are the main diseases that they’re facing, how are they managing those diseases currently and what would they do differently if they had a better, more resistant strawberry cultivar that could resist those particular diseases,” Tregeagle explained.

Researchers are also interested in looking at fumigation and how they might change in the presence of a more resistance cultivar, Tregeagle added. 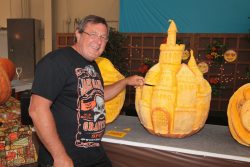 Russ Leno, master sculptor of sand, snow, ice, wood, watermelon, and his favorite—pumpkins, appreciates the the challenge of creating carvings from hundred-pound fleshy orange masses.  “This giant cultivar of a squash plant is a good material to carve in, Leno explained. “It gives you fast results, in under a five-hour time period. I like to entertain in front of crowds, and it just gives you something that people can see.”

“Everybody likes pumpkin carving. Everybody likes a jack-o-lantern. It’s just something that everybody enjoys, from the ages of 2 to 92, or even older. It’s still one of the last things I think we do. If you don’t do any art at all, you might still carve a pumpkin at this time of year. I just like the medium, and I just like doing it. It’s just fun. It’s a lot of fun.”

A recent performer at the Big Fresno Fair, Leno’s inspiration comes from within, as well as from looking at different artist sculptures, paintings, or drawings, or different elements in nature. “I might take a culmination of two or three different things and put my own spin on them. I might like something I see, but discover a better way to put a spin on it for a pumpkin. A lot of times, a pumpkin is only going to give you what it is going to give you because it’s only so thick and it’s hollow on the inside. You’ve got to be careful.”

“Everybody seems to think that they just pulled it out of a hat, and that’s just not true. After doing this for a number of years, I realized all the great sculptors from way back when didn’t just get a hammer and chisel and start pounding rock. They did a lot of planning and drawings up front.”

Leno initiates his ginger-hued creations from drawings and photos of posed people and things. “As you learn more about sculpting, to do something good, it is a planned event.”

He acknowledged you can carve certain things in certain pumpkins that you just can’t in other ones. “I might start out saying I’m going to carve this, but find the pumpkin is not thick enough or deep enough. The sculpture becomes something totally other than what I started out with, but that’s okay. They all come out nice at the end, and it’s fun.”

Leno, who has seen a range of pumpkins, which are native to North America, from different regions in the country with variations in size, shape, color and texture, but he prefers Prizewinner Pumpkins and small Atlantic Giant Pumpkins from the central California coastline. “These 100-pounders or 150-pounders are really good carvers because of the thickness -to-size ratio is very well proportioned so that you can get a fairly deep cut along with a proportionate-sized piece. They’re just great carving pumpkins.”

“I carve large pumpkins, and the people who grow the large pumpkins and I share a great love for the pumpkin itself and what it takes to grow them to their large sizes and their capability of being sculpted. You just don’t find these giant pumpkins just any old place. They require a little better soil conditions and fertilizers and specific pH balance in the soil to get these up at these sizes.”

“Pumpkin carving, which began as an all-American craft, has gained international popularity because of the internet and cultivation of pumpkins in other countries. A lot of countries now celebrate Halloween like we do, and people across the globe are now carving pumpkins and having a good time with them.”

“The internet has also created a way for sculptors to share their different carvings with like-minded people around the world.”