As previously reported, on March 26, Monterey County Superior Court Judge Thomas Wills ruled that the UFW underpaid their own employees and mandated the UFW to pay a $1.2 million award that covers former employees, organizers, and other members of the class action suit, as well as penalties for California Labor Code Violations.

On April 27, Judge Wills added $772,000 to UFW’s court expenses for attorney fees incurred by Noland, Hamerly, Etienne & Hoss (NHEH), the law firm that represented former UFW employee Francisco Cerritos in the class action and Private Attorney General Act lawsuit on behalf of himself and other current and former UFW employees.

In issuing the additional costs to the UFW, according to a May 3 NHEH press release, Judge Wills stated that, “The Court has not placed an amount to destroy someone, and the union does serve a socially laudable purpose, but (the union) has to follow the law; and when it doesn’t do so at the expense of others and that results in drawn out, protracted and complex litigation, it cannot expect the Court to turn a blind eye to what the consequences of what that conduct are.”

In an April 17 news release, Gerawan Farming called the April 14 decision of the Administrative Law Judge “erroneous” in that Gerawan did bargain in good faith. Further, Gerawan maintains that imposed mandatory mediation and conciliation does not constitute volitional negotiations. Gerawan will appeal this decision. The following are excerpts from this press release:

This unprecedented ruling would punish an employer for failing to “negotiate” the terms of a “contract” dictated and imposed by the ALRB. This is an in-house judge who is not independent; he is an employee of the ALRB. He criticizes Gerawan’s positions and second-guesses how it participated in what was supposed to be a confidential mediation and trial-like arbitration, but he never asked the only relevant question: How does this forced contracting process resemble a “negotiation”?

The so-called “mandatory mediation and conciliation” procedures (MMC) are neither consensual nor voluntary. It is forced contracting. The ALRB tells the employer what wages to pay, what employees to hire or fire or promote, and what portion of the employees’ salary will be turned over to the union. The employer may not opt out, and the employees are not given the choice to ratify or reject the so-called contract that will be forced on them, even if there are provisions detrimental to them.

Gerawan had no choice but to submit to this coercive process.

…The UFW did not bargain; it asked the ALRB to impose terms, based on a forced contracting process the California Court of Appeal has since ruled to be unconstitutional (and is now under review before the California Supreme Court).

To date, UFW’s unexplained 17-year disappearance from the Gerawan farm workers remains unexplained. During its absence, the UFW never negotiated a single wage increase for any Gerawan employee, nor did it attempt to bargain for a contract, collect dues, or file a single grievance on behalf of the employees. Meanwhile, Gerawan claims its workers are among the highest paid in the industry.

Yet, the ALRB’s controversial 2002 MMC provision appears to allow this AWOL union to force current Gerawan farm workers to choose between paying union dues or losing their jobs. The majority of Gerawan employees twice asked ALRB for an election to decertify the UFW. At the ALRB’s request, the Fresno Superior Court intervened and supervised the decertification petition and election process. This was the first time in the history of the ALRB that a court oversaw an ALRB election.

As yet, ballots cast by Gerawan farm workers in the sanctioned November 2013 election to decertify the UFW have never been counted, are being stored in an undisclosed and possibly an insecure location, and are the target of legal attempts by the ALRB and UFW to be destroyed.

The Court of Appeal is preparing to decide whether the ALRB may deny employees the right to choose who will represent them at the bargaining table—a seemingly basic American democratic right. The California Supreme Court is preparing to decide whether the UFW’s longstanding abandonment of Gerawan’s employees justifies this forced contracting process. California farm workers deserve a full and fair hearing on these issues. 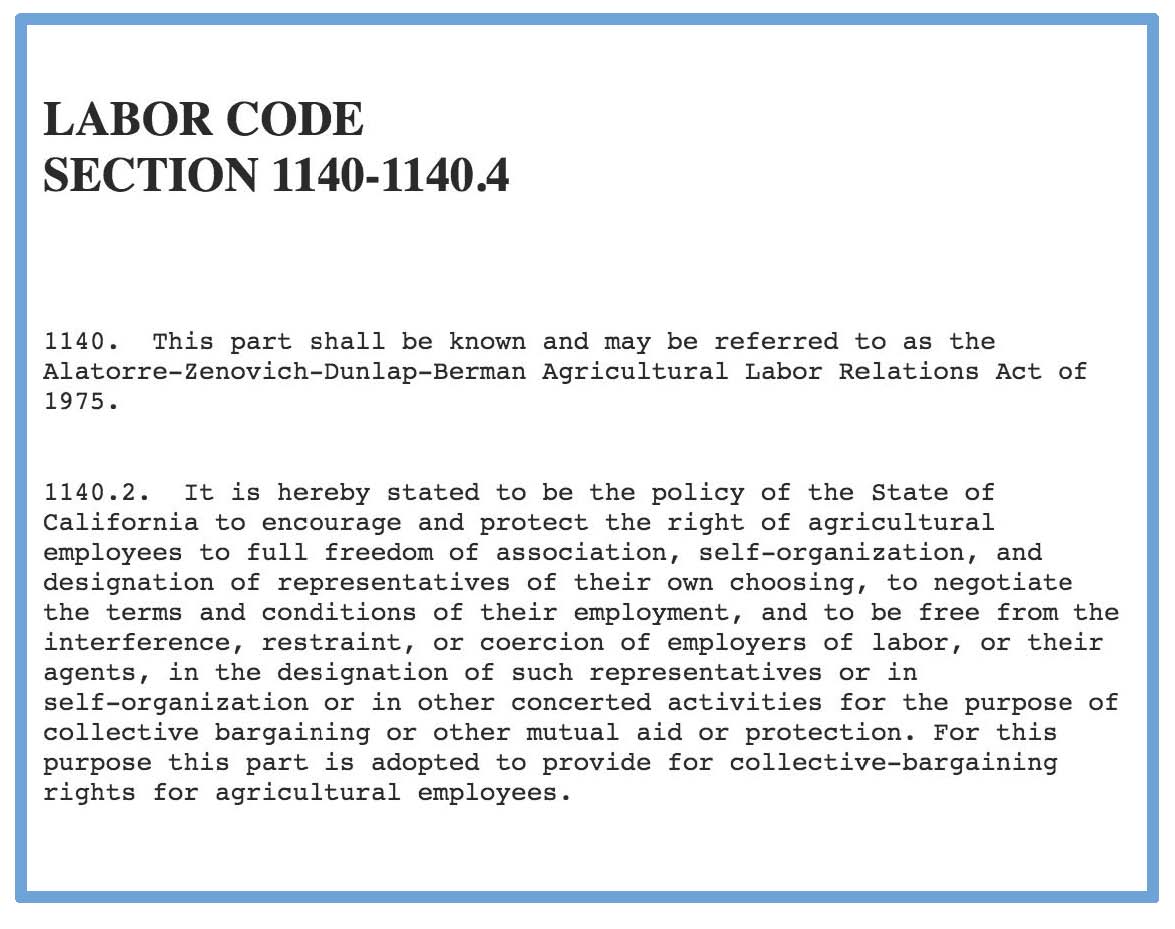 In an exclusive interview with Fresno attorney Anthony Raimondo, California Ag Today’s Patrick Cavanaugh discussed the significance to farmworkers of yesterday’s Agricultural Labor Relations Board (ALRB) decision to “set aside” Gerawan farmworker votes from the ALRB-sanctioned November 2013 election to decertify the UFW. Raimondo is the attorney for the UFW union decertification petitioner, Silvia Lopez, an employee of Gerawan Farming, a Fresno County diversified tree fruit operation.

California Ag Today: The central California agricultural industry is flabbergasted this week following the California Agricultural Labor Relations Board’s decision to set aside—and not count—the ballots of 2,600 Gerawan farmworkers cast in 2013. What is your take on this decision?

Raimondo: It is unfair because from the outset, we have argued all along that this entire process has been unfair and has denied the workers their “day in court” and their due process. From the first day that Silvia Lopez walked into the ALRB office in Visalia, the greatest opposition to her filing for an election has been the ALRB itself.

We had a judge who couldn’t stay awake for the hearing. We have board members who are—shall we say at the least—biased. In the case of ALRB board member, Genevieve Shiroma, we have a person whose entire career is intertwined with the UFW’s primary paid lobbyist. There’s no way these folks can be objective in a case that has this kind of stakes in the UFW.

And this case is all about money. If they can get a contract with Gerawan, the UFW will essentially double its revenue and double its membership overnight.

California Ag Today: What is at stake for the UFW?

Raimondo: There is a clear reason why the State would end up spending $10 million on this case: They want to silence these workers and save the UFW. There is no union organizing in the field; the UFW has abandoned organizing. They’re not out there getting the workers to support and join the union.

They’re in the courtroom and in the back halls of Sacramento, making deals to take control of these workers’ future, whether the workers want it or not.

California Ag Today: In denying the ballot votes to be counted, the ALRB said it was unfair that the employer—Gerawan in this case—gave the workers a pay raise without permission of the state government or the UFW.

Raimondo: But even with this illegitimate process, the only thing that the Board actually found was that the employer violated the law—not the workers.

So the Board is going to punish the employees by destroying their ballots, like some sort of third-world dictator. What control does the farmworker have over what the company does? What can the workers do to protect their right to vote if their right to vote can be thwarted by what a third party—the company—does?

The workers’ right to vote shouldn’t be in the hands of the company, or of the union, or of anybody else. The California Constitution says that when people cast votes in our state, those votes must be counted. That’s apparently true, unless you’re a farmworker.

California Ag Today: And the agricultural industry is asking, “How can the State of California and the state ALRB get away with this?”

Raimondo: It’s appalling what they’ve done here. It really is appalling. They’ve decided that the best way to control the behavior of an employer is to punish the workers who have no control over that employer.

You know there’s no reason that, if they believe that that election was tainted, they can’t run another election. I’ve spoken to Silvia, and Silvia’s not afraid of letting the people vote. I wonder if the UFW is as brave.

California Ag Today: Is the ALRB and the UFW requesting a new vote?

Raimondo: No, they want the farmworkers to stand off to the side and be quiet while the UFW makes the deal through political moves to take their money.

Raimondo: We are planning, on Silvia’s behalf, to file briefs in the ongoing mandatory arbitration case that is sitting before the California Supreme Court. The UFW has a brief due and the Court has not yet set a hearing date.

We’re hoping that the Supreme Court will be kind enough to give us the opportunity to speak in that case, as the Court of Appeal did. So that case still provides us with a very real chance to vindicate the workers’ rights.

In the election case that was just decided, we are planning on filing a petition for reconsideration with the Board. We think that they need to think twice before they destroy people’s ballots.

California Ag Today: The ballots have not been destroyed at this point, right?

Raimondo: We don’t know. That’s a question only the ALRB can answer.

From my view, I would hope that they were not rushing to have a bonfire today.

I would think that because these votes are precious and irreplaceable, the Board would show the restraint to withhold taking any action on the ballots until the parties have had the opportunity to pursue the various legal options that we have to challenge this decision and make sure they are doing the right thing.