“The proposed California Department of Pesticide Regulation (DPR) further restricting growers from applying crop protection products near schools is unnecessary,” noted Kelly Covello, president of the Almond Alliance of California, which advocates and lobbies for the almond industry.

“Basically, this proposed rule is going to add a layer of unnecessary regulation. It proposes restricting pesticide applications within a quarter mile of schools and daycare centers between Mondays and Fridays, 6am to 6pm,” said Covello. She noted there are already regulations in place to protect both the community and the applicator.

Likewise, Colleen Cecil, executive director, Butte County Farm Bureau, said, “We’re very confident in the regulation that currently exists and the responsibility that landowners take when it comes to spraying anywhere. There are rules in place and these rules work.”

“The environmental community has done a bang-em-up job at fear-mongering, period. They believe they can take pictures of kids next to fields and make the farmer the bad guy. Nothing can be further from the truth,” Cecil said.

“Nothing is more important than the health and safety of people,” noted Ceil. “As stewards of the land, farmers already do everything in their power to mitigate risks involved in agriculture and the application of pesticide is no exception.”  Cecil added, “The puzzling part of the proposed regulation is that DPR have stated themselves that they were ‘unable to quantify the benefits’ and that ‘any health benefits of the prohibitions are unknown.'”

Call for Growers to Take Action

“We have joined California Farm Bureau Federation (CFBF) and other organizations that are working on this issue,” said Covello. “One of the main calls to action for grower engagement with DPR is CFBF’s postcard campaign. If you would like postcards to share with your grower network, please email staff@almondalliance.org or simply print from the Postcard PDF document and mail directly to DPR (contact information is on the last page of the PDF document).   A high volume of input will be critical.

“This [proposed regulation] really is unnecessary,” said Covello. “There is no science. There is no injury or illness that has sparked the need for new regulations. We are really hoping we can get our growers engaged by sending in a postcard or sending in comments. Again, growers can contact the Almond Alliance by email at staff@almondalliance.org and by phone at (209) 300-7140.

“We would be happy to get you a postcard,” Covello said. “We can also email it to anyone. So please help us in this fight to stop unnecessary regulation.” 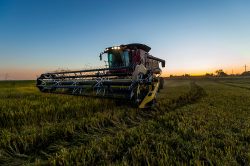 The Butte County Farm Bureau has been working to protect agriculture’s interests since 1917, thanks in large part to the continued hard work of their members. With continued support, the Bureau is able to advocate for growers on important issues in the community and fund educational opportunities.

Colleen Cecil, executive director of the Bureau, observed the rice harvest looks strong for Butte County rice growers, but a weather-related issue caused a bit of a problem during harvest. “We had some wet weather and then we had a break. Then it was, ‘Hurry up and get it done before the next storm comes in,’” said Cecil.

While the weather was an issue for growers, its impact was minimal. “There was a percentage, somewhere in the teens likely, of rice that was still left out in the field after the last wet weather event [in which] we just got pounded with rain,” Cecil noted.

“Water shortages over the past couple of years had forced many rice growers in Northern California to cut back on overall production. However earlier this year, as a result of improved rainfall last winter, growers went back to planting a more average level of rice. Those fields that had been taken out of production had a good amount of rest, and are now producing nicely once again.”

Though not uncommon, growers may have adjusted their harvest schedule in response to the early winter rain. “While it does happen on occasion, it is not ideal for farmers to harvest rice after wet weather all the time. It goes more slowly, it becomes a little messier, and it requires a transition from tires to tracks on their harvesting equipment. Again, it slows it down,” Cecil said.

“In 2013, the average rice grower in Butte County was producing just under 90 sacks per acre, with each sack weighing the [approximately] 100 pounds. Butte County has close to 88 thousand bearing acres of rice. While the local industry remains strong, early rainy weather can put a dent in production.”

Cecil explained, “It wasn’t that they couldn’t get [the rice] out, it was that the crop wasn’t ready to come out. There was still a tremendous amount of moisture in it and it wasn’t at the right percentage of moisture to take out of the field, so they had to wait.”

Last year’s crop report shows that Butte County’s five most valuable crops were walnuts, almonds, rice, prunes and peaches. The area’s walnut crop alone was valued at just under $241 million dollars. Cecil said this year’s harvest, “the almonds came off without a hitch. The walnuts got tagged at the end with the wet weather, but I don’t think it slowed everybody down,” Cecil said.