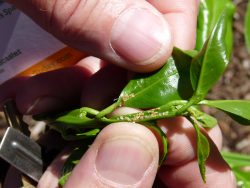 Beth Grafton-Cardwell is the director of the Lindcove Research Extension Center in Tulare County and research entomologist based out of the University of California, Riverside. She recently told California Ag Today that there is work being done on installing a net structure to protect trees from Asian Citrus Psyllids, which spread the deadly Huanglongbing disease. Texas A&M researchers are installing net structures on the edge of groves to block psyllids from coming into an orchard.

Psyllids have a preference for borders. These nets could have yellow sticky strips of material with an insecticide on it, so there would be an attract and kill process.

Other research is looking at netted structures that will completely enclose the citrus trees.

“Researchers are going to construct a completely enclosed net structure to grow the citrus trees in a block at Lindcove,” Grafton-Cardwell said. “We will study how well one can grow citrus under the screen so there could be the ultimate protection against pests and diseases.”

“The mother trees and increased trees have to be grown under the screen, but the field trees do not necessarily have to be,” she said.

Cold temperatures in the winter to protect the citrus from the psyllid.

“The cold temperatures hardened off the tissue, which makes it hard for the psyllid to find any place to lay eggs, and they probably cost some mortality to the psyllid,” Grafton-Cardwell explained.

Most outbreaks are in Southern California. Los Angeles, Orange County, and a few trees in Riverside.

“Prevention is working and there are fewer outbreaks in the Central Valley,” Grafton-Cardwell said.

Dr. Mark Hoddle and Dr. Kelsey Schall (both from UC Riverside) have been monitoring backyard situations. They are researching the release of beneficials such Tamarixia and other generalist predators like Syrphid flies.

“They have been reducing psyllids by about 70 percent in the backyards, and that’s really good news,” Grafton-Cardwell said. 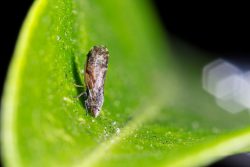 As we have reported in-depth before on California Ag Today, the Asian Citrus Psyllid (ACP) is a tiny, mottled brown insect that poses an ever-increasing threat to the state’s robust citrus industry, as well as to residential citrus trees. The pest can spread a bacterium known as Huanglongbing (HLP) that is fatal to citrus trees. The disease has nearly shut down Florida’s citrus industry.

Beth Grafton-Cardwell, cooperative extension specialist in integrated pest management, UC Riverside Department of Entomology, explained the significance of the recent ACP spread to Bakersfield. “That is really problematic because it’s mostly in the urban areas. It’s very difficult to find, to control and to stop that spread. It’s going to move out from that region into the local citrus orchards, and so there are lots of meetings and discussions right now to mobilize growers to get treatments to help protect their citrus orchards against the psyllid.”

To contain the ACP problem, Grafton-Cardwell stated, “There are traps everywhere, but the traps are not terribly efficient. So, we really need to carefully examine groves and flush [new leaf growth] for the nymph form,” she said.

Adults typically live one to two months. Females lay tiny yellow-orange almond-shaped eggs in the folds of the newly developing “feather flush” leaves of citrus. Each female can lay several hundred eggs during her lifespan.

The eggs hatch into nymphs that are wingless, flattened, yellow or orange to brownish, and 1/100 to 1/14 inch long. Nymphs molt four times, increasing in size with each nymphal stage (instar), before maturing into adult psyllids. The nymphs can feed only on soft, young leaf tissue and are found on immature leaves and stems of flush growth on citrus.

The nymphs remove sap from plant tissue when they feed and excrete a large quantity of sugary liquid (honeydew). Each nymph also produces a waxy tubule from its rear end to help clear the sugary waste product away from its body. The tubule’s shape—a curly tube with a bulb at the end—is unique to the Asian citrus psyllid and can be used to identify the insect.

Grafton-Cardwell and other experts are concerned because once the ACP becomes established in urban areas, it is difficult to eradicate. “It starts spreading into the commercial citrus, and we’re off and running,” she commented.

In a ingenious effort to control the spread of the psyllid, trained teams of entomologists have imported Tamarixia radiata, a tiny wasp that naturally preys on ACP, from Pakistan to research and release in California. A cooperative effort of the University of California Riverside, Citrus Research Board, United States Department of Agriculture and California Department of Food and Agriculture, researchers are also exploring the effectiveness of another beneficial insect called Diaphorencyrtus aligarhensis to assist Tamarixia with control of the Asian citrus psyllid. To see where Tamarixia and Diaphorencyrtus have been released, visit this University of California’s website map at, “Distribution of ACP, HLB and Parasites in California,” and turn on the parasite layers.
Grafton-Cardwell said, “They’re going to inundate that area,” with natural ACP predators, “so hopefully that will push back a little bit.”