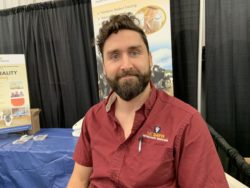 VMRTC is the Veterinarian Medicine Training and Research Center located in Tulare. The facility is an extension of the UC Davis School of Veterinary Medicine. The site offers education and training to veterinarians by offering senior veterinary students and residents on-the-farm clinical medical training and residencies in dairy production medicine.

Nathan Brown, a UC Davis veterinary student, is working on practicals in and out of a hospital setting.

“We do rotations in the hospital and outside of the hospital. We have a teaching center and, in addition, we have our California Animal Health and Safety Laboratory System (CAHFS), which is involved with diagnosing foreign animal diseases,” Brown said. “That is sort of the main mission.”

“In the mornings, we do herd checks, we go out to different dairies. We palpate cows for diagnosis of pregnancy, and we’re under the supervision of some of the veterinarians that work at our center,” Brown explained. “In the afternoons, we work on a variety of different projects. One of the projects that we’re working on currently is milking frequency. We are looking at different variables that go into whether or not it’s profitable to move from either two to three times a day or three times a day to two times a day.”

Brown said that the students at the Tulare center are doing their livestock track through UC Davis. “We’re all in our fourth year. It’s been a wonderful experience. Tulare is a great place, and it’s good to see a different part of California.”

Students studying at the center decide which direction they will take regarding animal type or other medical pursuits.

“After our second year, we make a decision about whether we do small animals or large animals,” Brown said. “Some people do equines, other focus on zoo animals—there is a variety of options in our profession and that our school offers.

Brown is pursuing livestock medicine, but he has a commitment to the Air Force to do public health epidemiology for them.

Army veterinarians do clinical medicine for animals on the base. They focus on German shepherd dogs and horses, and they also do some food safety.

“As as a veterinarian in the Air Force, it’s essentially veterinary public health, and my role will be epidemiology on a base, so that’s actually more human focus, and food safety,” Brown said.

“If you kind of think about the historical roots of veterinary medicine, much of the role of veterinarians has been ensuring that food is safe for humans to consume, meaning that the animals are healthy before they get ready for human consumption,” Brown explained. “We must ensure that there’s no points of contamination so that all the food that people eat in this country is healthy and nutritious, and we don’t have to worry about disease.”

Most bases have a veterinary clinic, primarily staffed with army veterinarians.

“My hope is to do some amount of clinical practice at these clinics to sort of keep my veterinary skills relevant. And I’ve had some good advice from some epidemiologists who works at the CDC,” Brown said. “He told me that at least for him, it’s made him a better epidemiologist by keeping his clinical skills relevant because thinking about that differential diagnosis is really a big part of trying to find the cause of a disease.” 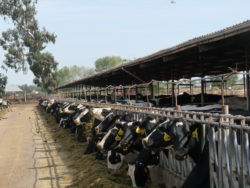 Dairymen and women throughout California are working hard to provide milk and other dairy products for consumers in California and the world. Because the industry has struggled over the past decade with price swings that have often landed dairies in red, many dairies have gone out of business. Still, other operations relocated to others states where regulations are a fraction of what they are in California.

In June 2018, California dairy producers voted to establish a new Federal Milk Marketing Order (FMMO) for the state. The vote was a paramount step in a long process that would culminate with the new order taking effect on November 1. The order will adopt the same dairy product classification and pricing provisions currently used throughout the FMMO system.

California accounts for more than 18 percent of U.S. milk production and is currently regulated by a state milk marketing order administered by the California Department of Agriculture (CDFA). Once this new FMMO takes effect, more than 80 percent of the U.S. milk supply will fall under the FMMO regulatory framework.

Western United Dairymen is a trade association based in Modesto. Annie AcMoody is the Director of Economic Analysis. She explained that there have been questions from the industry regarding the upcoming FMMO.

Among the often asked question revolves around when the state switches to FMMO in November, what will happen to their quota if a dairy ships milk out of state?

Annie AcMoody: When our California state system goes away to make way for the Federal Milk Marketing Order (FMMO) in November, the Quota Implementation Plan (QIP) will be the language in place to ensure the quota system’s smooth transition into the FMMO system.

When we enter that new world, all market milk received from California producers at a California plant will be assessed for quota. By “received”, the language defines “to convey milk physically into a milk plant where it is utilized within the plant, or stored within such milk plant and transferred to another plant for utilization.” This means that a milk truck driver cannot drive by a plant, wave hello to an operator, and keep on going out of state and still call this milk received in California. Basically, if your California milk leaves the state, you will not be assessed for quota.

While it may not make much economic sense to hold on to quota you are not paid for, some reasons may validate that decision (perhaps it is expected milk will be shipped to a California plant in the near future). If you were to decide to hold on to that quota, it is important to keep in mind that “if quota is not made active by shipments of market milk to a California plant or cooperative association or is not transferred within the 60-day period, such quota shall revert to the Department”.

This excerpt from the QIP means that if your quota milk is not paid on for over 60 days, you will lose it, so you better sell it. This is likely going to be an issue if you ship to a proprietary plant and all your milk goes out of state. If you ship milk to a cooperative, there is more flexibility because that coop has the ability to combine quotas assigned to it by its members.

So as long as the quota total within the coop is not larger than the total amount of market milk produced and received in California, then there should be no issue for you as a quota holder.

If your milk is Grade B, you cannot have quota now and will not be able to under the QIP. You will not be assessed for it either. Currently, only around 3% of the milk in California is Grade B. WUD will keep an eye out on this topic to ensure that percentage does not deviate significantly. As a reassurance, this is not something that could grow from 3% to 50% in a month since fluid milk is not allowed to take in Grade B milk and the three largest coops in the state (CDI, DFA and LOL) committed to not taking in any more Grade B milk after the transition to the FMMO.

In 2013, 33 California counties recorded milk production, indicating that a total of 41.2 billion pounds were produced.

This statistic represents a 1.3 percent decrease in overall milk production compared to that of 2012.

They alone were responsible for 52.9 percent of all the milk produced in California.

Compared to 2012, milk production in San Bernardino went down 21.36 percent and decreased by 9.28 percent in Riverside, respectively.