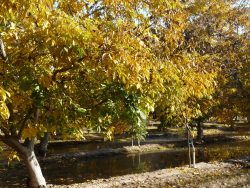 There has been some exciting research taking place examining the effects of high levels of boron on various types of rootstock. Katherine Pope is an Area Orchard Systems Advisor, covering a large area that includes Sacramento, Solano and Yolo Counties.  High concentrations of boron have been a big problem for some growers in the area.

“This is a bigger topic for Yolo County, and there’s a few areas on the west side of Fresno county and also areas in San Joaquin County … that have excessively high boron. There’s veins of boron that come out of the Coastal Range,” Pope said.

Pope’s work as a UC Cooperative Extension Farm Advisor has her involved in covering production research, education and assistance with almonds, prunes and walnuts.  Boron can cause a myriad of problems in orchards, making preparation before planting even more important.  “You would want to test your water and your soil before you plant. Because if you plant the wrong rootstock on high boron ground, boy, you’re going to feel it for the next 20 years,” Pope said.

Some of the early findings of the project have shown there is not a steadfast rule regarding what rootstock variety fits what limitation.  “We have nine different rootstocks that we tried, of a lot of different origins. Peach-almond hybrids, some that have plum in them, or some that are just peach,” Pope said.  Other preliminary findings suggest that complex hybrids are more tolerant to high boron, sodium and chloride.

Some of the rootstocks that appear to be performing well under heavy boron conditions are both peach-almond hybrids.  “Both Titan FxA and Nickels performed really well last year. … That’s probably a mix of generally being vigorous trees, and so they’re higher-yielding no matter what, and the wider spacing we have them at,” Pope said.

The project has also shown that the rootstocks Lovell and Krymsk 86 continue to perform poorly under high boron conditions.  “Lovell – which is usually a fairly sizable, decently-yielding tree – and Krymsk have both had pretty low yields, about one-third of the yields of the highest yielding trees,” Pope said.  Researchers can tell that those rootstocks are letting a lot of boron up into the tree by looking at the boron numbers in the hull.  “Those two rootstocks do well in a lot of conditions but high boron is not one of them, according to the results we have.”

The trial is still fairly new, as the rootstocks were planted in 2011.  Last year was the first significant harvest.  Pope mentioned that if boron levels reach 0.5 parts per million, that’s  when it starts to become a concern.