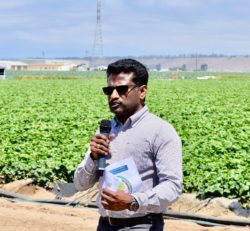 “Growers are well-educated and have a support system that provides information to them very regularly,” Dara said.

Growers try to apply as much of the IPMs as possible, but there is always a lot more scope in terms of using non-chemical alternatives. That is an area that has room to grow.

“The more we know about the options and their potential, they can be more adopted,” Dara said.

He explained that the strawberry growers often lean on biological insects such as beneficial mites that treat those damaging insects. It’s all part of IPM.

The insects are used outdoors along with in greenhouses.

“A bio-control is very well done in strawberries for mite control, but we do not have similar natural enemies for other pests,” Dara said.

There are botanical and microbial options for pest and disease management, and a lot of work is being done about understanding how they work and placing them in the right strategy.

“So, there is definitely plenty of options for us,” Dara said. 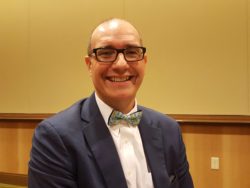 The Biological Products Industry Alliance (BPIA) was started 16 years ago for only five biopesticide member companies. Now there are 129 member companies and membership ranges from manufacturers of biopesticides and biostimulants to service providers, marketers, distributors, and anybody who touches this industry.

Keith Jones is executive director of the BPIA. He said during a recent meeting in Rochester, NY, that the alliance is growing.

“The running theme for the event was the growth of our association, the growth of the industry, and much of that is driven by consumer demand, regulatory pressures, and just a real move towards a sustainable future in agriculture and other markets where biological products are used,” Jones explained.

Biological products got their start in commercial agriculture, such as fruits and vegetables but have grown in demand by other markets like golf courses and ornamental operations. Among the earliest biologicals used in production agriculture are B.t. products.

Biologicals are all part of integrated pest management and can be used during different parts of the production season, where conventional products are not labeled for use.

Biologicals can be used at the onset of a growing season and when getting close to harvest, because there are less or no pre-harvest intervals.

“What’s great about biologicals is that most of them have multiple modes of action, so it’s very hard for the pests to become resistant to that,” said Jones, adding that, “There are many benefits of biologicals, and their acceptance is growing rapidly.” 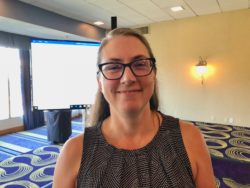 The term “regulation” is often an unattractive vernacular for farmers and ranchers, just as “pesticide” or “chemical use” would be for the uneducated public. Amy Roberts, Regulatory Affairs Manager for Lallemand Plant Care based in Montreal, Canada, is working to make both sides come together.

California Ag Today caught her comments at the 2018 Biological Products Industry Alliance (BPIA) Fall Meeting and Sustainability Symposium in Rochester. Roberts has been appointed the 2019 chair of BPIA

Lallemand Plant Care is a company that specializes in the use of microbes in agriculture for pesticides and biostimulants. However, Roberts has assisted them in taking on an even greater task.

“We’d like to be a voice to help improve things in a regulatory standpoint and perception standpoint,” she explained, and with the organization growing to represent the industry as a whole, “the goal seems tangible.”

This doesn’t come without its obstacles though, and Roberts noted that there is a lack of clarity for the regulatory framework, making products harder to market.

This combined with the continuous hesitation towards pesticides and biostimulants from people unfamiliar with the industry makes education and understanding on both ends that much more important.

More information can be found at www.bpia.org