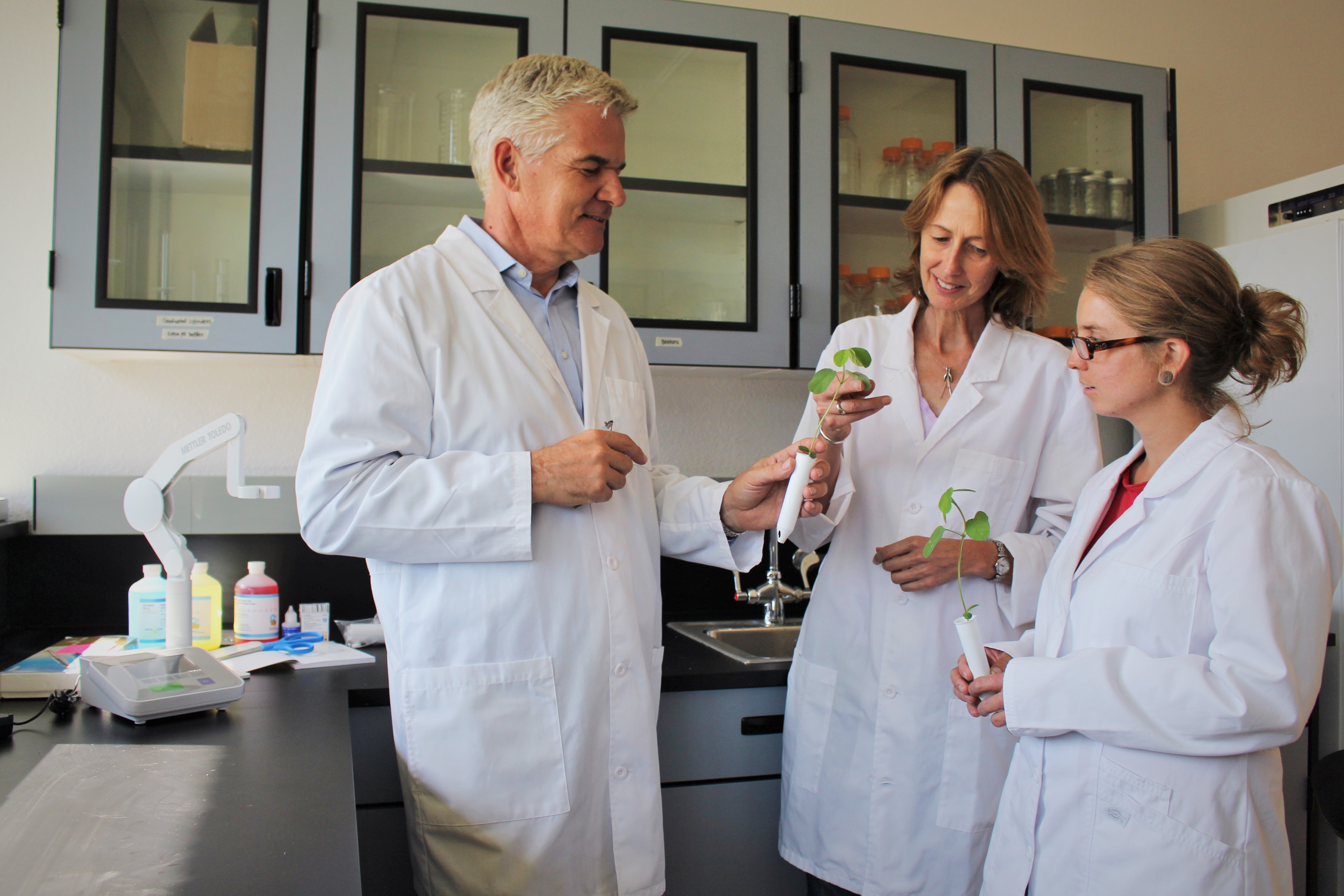 BioConsortia, a  leader in microbial solutions that improve plant phenotypes and increase crop yields with reduced chemical and fertilizer inputs, is announcing an expansion of its R&D laboratories and team with a new, state-of-the-art facility in Davis, CA.

BioConsortia Senior VP Operations & Administration, Christina Huben, said, “The new and modern laboratories will provide the needed space and facilities for our growing R & D team and expanded platform, particularly in synthetic biology, microbiology and fermentation. This new facility has more than doubled BioConsortia’s operations space and positioned our Company for future growth.”

Betsy Alford Ph.D. from UC Davis and Andrew Phillips Ph.D., from Bayer CropScience, both join the BioConsortia team that is currently utilizing gene editing to develop the next generation of products for nitrogen fixation, yield enhancement, and crop protection. The power of gene editing unleashes the natural power of microbials by enabling an over-expression of biocontrol metabolites or the continuous fixation of atmospheric nitrogen to help plants grow healthily and higher-yielding with fewer conventional chemical inputs.

BioConsortia CEO Marcus Meadows-Smith concluded, “It is a very exciting time at BioConsortia. The most recent hires to our world-class team of scientists further expand our expertise and will accelerate our work in gene editing and genomics. Our new laboratories provide the space needed to further our endeavors.

In December we announced a major collaboration with Mosaic for the development and commercialization of our nitrogen-fixing products. We have a pipeline of biopesticides and biostimulants in registration and partner evaluation phase.”

Meadows-Smith concluded, “We are delivering on our goal to support growers and sustainable agriculture by developing microbial products with higher consistency and superior efficacy.” 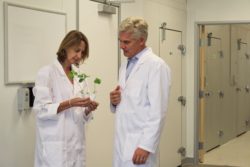 Getting even closer to helping California agriculture, BioConsortia, Inc., an innovator of microbial solutions for natural plant trait enhancement and yield improvement, has closed a further round of equity financing to support its continued growth, research achievements, and development of superior products.

The $10 million round was led by Otter Capital and contributed to by Khosla Ventures, both of which are long-term backers of the biotechnology company and experienced ag tech investors.

The completion of Series D will further support the increased momentum BioConsortia saw in 2017, with three strategic new hires, the addition of a sixth U.S. patent, and the planting of fall and winter field trials. Funds raised will be used for the commercial development of a number of novel microbial consortia products — focused toward corn, wheat, soy, tomatoes, and leafy vegetables.

BioConsortia will also continue to build upon its proprietary discovery process Advanced Microbial Selection (AMS) including supporting the expansion of the AMS platform itself, incorporating deeper and more specialized analytics. Collectively, these steps will drive the company towards the establishment of an original and proven platform for the development of more efficacious and consistent microbial products for a wide range of agricultural crops.

“We are excited by the progress that we have made in product development, for both biostimulants and biopesticides, and the recognition from our investors.” says Marcus Meadows-Smith, CEO. “This new funding allows us to increase our annual spend on R&D, adding more tools from genomics, microbiome and machine learning to our already powerful discovery platform.”

A portion of BioConsortia’s planned development has been and, will continue to be, driven by the key hires made last year: Drs. Jenna Lang and Steven Wu providing scientific leadership in Microbiome Ecology and Computational Biology, respectively. Microbiome analysis and computational modeling underpin BioConsortia’s AMS process. When combined with the extensive physiological data collected throughout the discovery program, microbiome insights enable identification of the functional microbes benefiting high-performing plants, either as individuals or as consortia.

“Collectively, Jenna and Steven have a tremendous wealth of experience and expertise,” says Dr. Sue Turner, Sr. VP of Research. “Throughout the AMS process, we are capturing huge amounts of data; knowing how best to efficiently manipulate and analyze it is crucial for advancing leads and finding new, superior microbial solutions.”

In addition to adding big-data expertise to its research group, BioConsortia has been developing a strong fermentation team as it reaches the final steps in developing leads for commercial launch. Dr. Jorge Santiago-Ortiz joined the company as lead Fermentation Scientist early last year and has worked closely with Dr. Hong Zhu, Sr. VP Lead Development and Manufacturing, to lead scale-up and formulation experimentation in the newly built formulation facilities at the company’s Davis headquarters.

The drive to commercialization is now under way as several microbial treatments transitioned from second and third year field trials across a range of crops and geographies last year. A select number were entered into repeat field trials by major industry players, and these are moving forward to further testing and development. The early-stage biopesticide program also saw many remarkable successes in greenhouse and field trials, and so will be expanded onto many more crops in 2018.

“The expertise that we have added really reflects the comprehensive nature of our discovery and development platform,” Zhu said. “It has set us up for success as we ramp up our 2018 R&D program and move ever closer to product launch.”

Marcus Meadows-Smith is with BioConsortia, a research and development biodiscovery company in Davis, Calif. He and his company have big plans to invent the future for Ag.

“The company was founded about 20 years ago in New Zealand and was funded by a U.S. private equity,” said Meadows-Smith. “We decided to globalize the technology, and I became the founding global CEO of the company as it was established in the U.S. about 1 year ago.”

The company in New Zealand is called BioDiscovery. For many years, it was a contract research company that was very successful in the microbial space, working with companies like Monsanto and Syngenta. Then Biodiscovery made a R&D breakthrough. “We have totally restructured the company so that the global headquarters and global R&D are now run out of the United States,” noted Meadows-Smith, “and the New Zealand company has become the subsidiary that handles complementary R&D functions.”

Meadows-Smith mentioned that UC Davis and surrounding areas such as West Sacramento are teaming with bioscience researchers. “It’s turning into a bit of a hub for microbial expertise with several of the big players. Obviously you’ve got UC Davis, which is always credited as being the number one U.S. agricultural university. I’ve heard that it is now the world’s best agricultural university, so it’s a great place to be.”

“We’ve got an excellent team of scientists in Davis, and the historic team in New Zealand has a lot of experience. They’ve been working together now for about five years, so the R&D down there is really humming at a great pace,” said Meadows-Smith.

“We’ve been able to rapidly bring together a group of scientists in the U.S.,” said Meadows-Smith, “that have jelled. We have set up a series of experiments, and we’re putting discoveries together. It’s a very exciting time to be doing pure research in the lab.”

The company is biological- and microbial-based. “We are looking at teams of microbes to improve plant traits and increase plant yield . We are developing products for fertilizer-use efficiency, abiotic stress tolerance, and biotic stress,” said Meadows-Smith.

“Pests and disease control are important, as well as metabolite expression,” he continued. “We’ve identified teams of microbes that instruct or enable the plant to deposit more sugar. As you can imagine, this provides the double productivity benefit of increasing both yield per acre and sugar content per plant.”

“While getting the plant to have increased sugar deposited in its leaf structure is a good thing; but that is actually not our main focus,” Meadows-Smith said. “We look at all the crops we want to target and ask what are the biggest needs today?”

“Fertilizer, for example, is a significant cost for the grower, so fertilizer-use efficiency products, we believe, would experience a large demand,”  Meadows-Smith stated. “There are also concerns about fertilizer leaching into groundwater, so the more efficient you can make plant take up the fertilizer, the better,” he added. “And of course, living in California, we are acutely aware of the importance of drought, so we are working on that as well. We are hoping for a yield increase per acre for the grower in everything we do.”

“We are moving products down the pipeline as we speak,” he commented, “and, obviously, we want a large body of data to demonstrate to growers how to best use our products. We are looking for two years of good field trial results and then we’ll go through the registration process. So we are expecting to get our first product on the market by 2017.

“We are developing products that contain beneficial bacteria, beneficial fungi, and good plant colonizers,”  Meadows-Smith declared. “Some will colonize the root system, and some the outside of the plant. Still others, endophytes, that will actually grow through the plant tissue. Just as we humans have microbes in our guts to aid digestion, plants actually have beneficial microbes, bacteria and fungi growing within the plant tissue,” Meadows-Smith explained.

Meadows-Smith said BioConsortia’s revolutionary platform will take biologicals to the next level “by assembling teams of microbes that perform complementary functions; so while some microbes will enhance the root system, others will aid the root in nutrient uptake,” he said. “This will bring consistency and superior performance to the marketplace. It’s a very exciting time for the industry as a whole,” he said.

“We are looking to transform food production in a way that is sustainable, bringing benefits to the grower and feeding the world with nutritious, affordable food. That’s what we are in this industry for. These are very exciting times!” Meadows-Smith said.