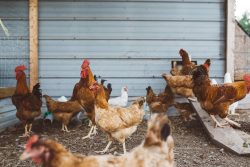 University of California poultry experts are urging poultry owners to examine biosecurity for their flocks after avian influenza was confirmed in commercial chickens in Tennessee by the USDA Animal and Plant Health Inspection Service on March 5. To protect the birds’ health, UC scientists recommend taking measures to prevent poultry from coming into contact with wild birds.

“Based on the initial sequence of the virus, the source of the virus is thought to be waterfowl,” said Maurice Pitesky, UC Cooperative Extension poultry specialist in the School of Veterinary Medicine at UC Davis. “This is consistent with the current understanding of how avian influenza spreads and evolves. Specifically, juveniles are infected at breeding locations and travel south in the fall carrying virus. As the waterfowl move southward, they are more likely to interact with other species, increasing the risk of interspecies transmission and formation of new varieties of avian influenza.”

The case in Lincoln County, Tenn., is the first report of highly pathogenic H7 avian influenza in commercial poultry in the United States this year. The flock of 73,500 affected chickens is located within the Mississippi Flyway, one of four North American flyways for migratory birds.

“Lincoln County is located in one of the medium-high risk areas that were identified by our risk map, said Beatriz Martínez López, director of the Center for Animal Disease Modeling and Surveillance in the School of Veterinary Medicine at UC Davis.

The UC Agriculture and Natural Resources researcher, who studies risk factors for the spread of avian influenza, noted that California is within atthe Pacific Flyway.

“We need to increase awareness of poultry producers to maximize the biosecurity implemented in their operations, particularly in those located in high-risk areas, mainly farms that are in close proximity to wetlands or other wild bird feeding and resting areas,” Martínez López said.

Poultry owners can identify biosecurity strengths and weaknesses for their own farm or backyard flock by filling out a free survey designed by Martínez López and other poultry experts. People who raise chickens, quail, ducks, turkeys, geese or other birds anywhere in the United States are invited to use the resource. At the end of the survey, participants receive specific research-based recommendations of biosecurity measures they can apply on their own types of farms. The poultry biosecurity survey is available in English  http://bit.ly/2kkMycf and Spanish http://bit.ly/2mjO13G. The survey takes 15 to 20 minutes to complete and will be open until June 1.

If you would like UC Cooperative Extension to notify you if there is an avian influenza outbreak in your area, sign up on the California Poultry Census page: http://ucanr.edu/sites/poultry/California_Poultry_Census.

Owners of backyard chickens who observe illness or increased mortality among their birds should call their veterinarian or the California Department of Food Agriculture sick bird hotline at (866) 922-BIRD (2473).