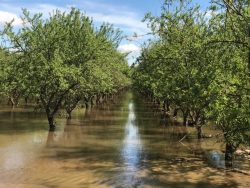 The Irrigation Improvement module allows growers to move through from the most basic to the most advanced.

Cooper said if growers sign up for CASP at SustainableAlmondGrowing.org and complete all nine modules, growers will receive a copy of the Almond Irrigation Improvement Continuum, a 154-page of soup to nuts on irrigation management that has taken more then 40 years of research that almond growers have funded.

Earlier this month in Sacramento, the California Almond Board hosted their 44th annual Almond Conference.  As the largest event in the world for almond industry professionals, the conference offers the chance to connect with the people, the science and the products at the forefront of the global almond industry.

Terry Prichard is a retired Cooperative Extension Irrigation Water Management Specialist from UC Davis.  He was one of the speakers involved in the “Good Irrigation Water Management Practices” discussion.  Prichard noted the significance of choosing when to start irrigating in almond orchards.  “Irrigating too early when the soil profile is full can lead to all sorts of problems with saturated soils, disease problems and, in general, potential to lower production.” Prichard said.

The conference offered an opportunity to witness a live demo of a free tool available to all California almond growers that generates irrigation run-time schedules based on local evapotranspiration and information about your individual orchard and irrigation system.

Prichard mentioned that they have simplified the process into a single sheet of information for growers.  “What we’ve done is prepare a one-sheet method for utilizing your soil’s capabilities and then crossing that with the effective rainfall during the winter and how well it fills that profile, as well as how much effective rainfall falls in the spring,” Prichard said.

The one-sheet method essentially allows growers to delay irrigation by utilizing soil moisture that is stored, along with any effective rainfall in the spring, so growers can adjust their irrigation volume. “There are other ways to determine when to irrigate, but this was a method that is easy to use, requires no new technology and purchase, such as with a pressure chamber, which, that can be done. We intend to put another one pager together on using the pressure bomb,” Prichard said.

The one-sheet method Prichard and his team are continuing to develop should be applicable to growers throughout the state.  However, geography will play a significant role in how the method will be utilized.  “In areas of the state which receive a substantial amount of rainfall, it’s going to fill the profile. However, as you move farther south, that’s not the situation, and often times we do not fill the profile.  This is where we’re applying water during the off-season to charge the profile for the next season to start with the profile full of water, ” Prichard said.

The one-sheet method can also be used to accomplish leaching if there is excess salts contained in the water.  “You can leverage the winter’s rainfall and drip by irrigating when the trees are dormant so as to fill the wetted zone of the root zone so that any rainfall that occurs then the salts tend to move away from that root ball area that’s wetted and out away from the roots farther. That’s a very effective strategy when using drip irrigation,” Prichard said.

Prichard has an extensive background in soil salinity issues, crop response to limited water supplies and irrigation water management.  “No one wants to be behind on irrigation, but the goal of this particular one-pager is to keep that in check a bit until the soil has enough room in it to support the irrigation water that you’re applying without saturation,” Prichard said.