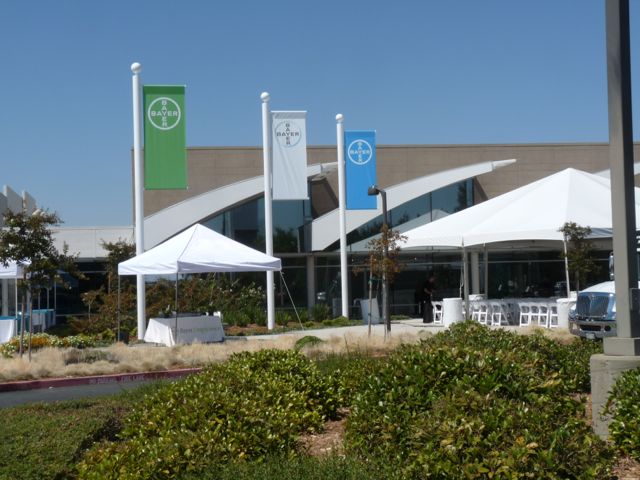 Biopesticides Are Valuable Part of Pest and Disease Control

Bill Stoneman is the executive director of the Biopesticide Industry Alliance, which is dedicated to fostering adoption of biopesticide technologies through increased awareness about their effectiveness and full range of benefits to a progressive pest management program.

“These are very important tools in terms of resistance management because they allow us to target alternative modes of action against pests. Biopesticide technologies are tools in the quiver, as well as the chemistries we are currently using and developing,” said Stoneman.

Biopesticides offer many other benefits, such as no maximum residue level (MRL) issues, reduced preharvest intervals and decreased reentry intervals.

“What you’re going to find, is that they will be used in rotation with the chemical pesticides or other cultural methods to prevent plant diseases and insects. I think you’re going to see more development in the seed treatment area. Again, seed is a good delivery mode to get things to the plant’s roots, and that’s where a lot of these materials are effective, from the plant-disease perspective,” said Stoneman.

With regard to insect control, Stoneman said, “We’re going to see new things coming into the marketplace. Some insect-specific viruses are going to be expanding in the U.S. soon, with applications on a variety of crops—but very insect specific—so in other woBill Stoneman Bayer Crop Science West Sacramentords, they kill only that insect, so there is no harm to pollinators or beneficials,” said Stoneman.

This will be more common in the future, according to Stoneman, “I think we will see as a trend going forward more reliance on the biologicals, pollinators, tailored pest control programs and IPM approaches to preventing any damage to those natural control forces in agriculture,” said Stoneman.

A big step for Biopesticides in California was the recent grand opening of the Bayer CropScience’s $80 million investment in their biologics and seed business in West Sacramento. It will focus on this new frontier of pest and disease control.

Adrian Percy, global head of research & development (R&D) with Bayer CropScience, explained Bayer’s decision for the West Sacramento location, “First and foremost, California is an amazing hub of agricultural innovation. We have UC Davis just down the road, which we have close ties to. In 2012, we purchased AgraQuest, which was based in Davis, so basically we’re moving them into this new facility which is much bigger and more state-of-the-art than what they were using previously,” said Percy.

“We’re really excited because here we will be researching brand-new applications based on bacterial-based products, fungicides, insecticides, etc. In addition, we will be developing new vegetable seed varieties,” said Percy.

Among the advantages of these new biologic tools for growers is avoidance of MRLs, a big boon for vegetable growers. “We see a lot of advantages for these types of products. And this is one of the fastest growing sectors both for us as a company, but also in general. What we are seeking to do now is bring next generation products to the marketplace which are even better than the ones we have today,” said Percy.

“These kinds of products, I think from a stewardship and management perspective, are very advantageous to the grower,” he added.

“We are investing heavily in R&D infrastructure such as laboratories, greenhouses and breeding stations as well as new production capacities and seed processing facilities,” Condon explained. He said that the company aims to grow faster than the U.S. market.

Bayer CropScience plans to invest close to US$ 1 billion (EUR 700 million) in Capital Expenditures (CAPEX) in the United States between 2013 and 2016, mainly to ramp up research and development and to expand a world-class product supply of its top crop protection brands. These expenditures are part of a global investment program Bayer CropScience started last year, with a total CAPEX for the period 2013 to 2016 of EUR 2.4 billion (approximately US$ 3.3 billion).

Consolidating and expanding R&D organization is key for Bayer CropScience

Bayer CropScience seeks to better leverage its full research and development capabilities by consolidating and expanding its global R&D organization. “Our integrated West Sacramento site represents a major step forward in our efforts to enhance our vegetable seeds and biological crop protection innovation efforts,” said Dr. Adrian Percy, Global Head of Research and Development at Bayer CropScience. “The investment into this state-of-the-art facility creates an environment where our researchers and experts can find the best possible conditions to discover solutions that growers across the globe can depend on to produce high-quality food in a sustainable manner.”

The new West Sacramento site, which also serves as the global headquarters of Bayer CropScience’s Biologics Business has the capacity to house up to 300 employees. The approximately US$ 80 million facility is situated on 10 acres of land and features a 100,000-square-foot building and a 35,000-square-foot pilot plant to support research and development of biological crop protection products, as well as a 30,000-square-foot Vegetable Seeds research building. The facility will also include a 2,000-square-foot greenhouse and five acres of nearby land for future greenhouse space.

Expansion of production capacities in the USA

In addition to building its R&D network in the USA, Bayer CropScience is also investing significantly in the production capacities of its crop protection products.

“Along with capacity expansions at our Muskegon, Michigan and Kansas City, Missouri sites, the construction of our new plant in Mobile, Alabama for the production of our herbicide Liberty™ will contribute significantly to our future growth plans,” stressed Condon, who pointed out that the increased production of Liberty™ will help U.S. growers fight weed resistance, a key challenge for U.S. farmers.

“The single biggest investment item in the USA is our planned capacity expansion of Liberty™ herbicide. This is a strong signal to the market as Liberty™ is the only nonselective herbicide that controls glyphosate-resistant weeds,” said Jim Blome, president and CEO for Bayer CropScience LP and Head of Crop Protection for the North American region. “Two-thirds of our planned investments in the United States between 2013 and 2016 are intended to expand our production capacities. This includes measures to further optimize our supply chain in order to increase flexibility and thrive despite market volatility,” Blome added.

Bayer CropScience is also investing constantly in its Seeds business. In June 2014, the company announced plans to expand its North American and global Seeds headquarters in Research Triangle Park (RTP), North Carolina. The RTP site has experienced significant operational growth in recent years, and approximately US$ 200 million will be invested through 2016. “The construction of greenhouses as well as the necessary infrastructure and land development represent our continued commitment to growth in RTP,” said Blome.

The overall RTP investment program includes further important projects, for example the construction of the Development North America facility dedicated to Crop Protection and Environmental Science research; renovations to Bayer CropScience´s North American headquarters, scheduled to be completed in 2015; construction of the 6,000 square-foot North American Bee Care Center; and the purchase of 70 acres of land to accommodate future growth, which includes a new 29,500 square-foot greenhouse.

Bayer CropScience also plans to invest approximately US$ 90 million in its Cotton Research and Development Laboratory in Lubbock, Texas. Founded in 1998, the company’s global cotton headquarters is focused on providing cotton growers with the products and solutions they need to meet the world’s growing demand for fiber. With a staff of around 120 experts, Bayer CropScience operates two breeding stations, a seed processing plant, a quality assurance lab, a seed warehousing facility, and a state-of-the art research and development lab.

Complementing this, the company also invested US$ 17 million in the expansion of its Memphis Research and Development site, bringing total greenhouse capacity to 76,000 square feet. Located in the heart of the Mississippi Delta, a world-class group of scientists, researchers, technicians and agronomists with a specialized set of skills is developing high quality cotton and soybean varieties as well as trait innovations. Their aim is to support Bayer CropScience’s growing global cotton and soybean seed businesses through molecular breeding and other innovative technologies.