Glyphosate to Be Defended 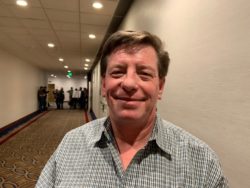 Glyphosate to Be Defended

It is a cornerstone of weed control around the world and even though there are countless pending lawsuits against glyphosate herbicide, company officials vow that they will continue to fight for its continued use, as there has been no evidence that it has caused cancer anywhere in the world.
“The facts are still there, but in three cases that were as found against us, were all in Northern California,” said Steve Gould, a National Account Manager for Bayer Crop Science, speaking at the California Weed Science Society Annual Conference in Monterey “One was the Johnson trial, which was the first trial about the school district employee, the second one was a vineyard owner, and the third one was a consumer. A crop trial is set to start soon in St. Louis.”

Gould said all court case decisions are on appeal. “So, when you see this TV commercial about settlements, count on them continuing as they are funded by lawyers,” said Goud.  “My mother's 84 years old, and she tells me every time I talked to her about how she's seen this commercial more and more nowadays than she did a year ago. And I said, ‘Yeah, you're going to see more and more of it until something more happens down the line with this situation,’” he said. “But nobody's been paid any money, they're all on appeal.”

Additionally, there were supposed to be several trials starting in the fall, but those were postponed. And currently, a jury is being selected in Contra Costa County for the next trial. “It's interesting because there have been about five or six others that have been moved back. So, we were supposed to do some in the fall in St. Louis and they've been moved back, and even three of those are still been moved back again,” explained Gould. “These lawsuits are not a class action suit. This is one case at a time, and so far, there has not been any arbitration.”

If anyone has seen the news/commercials that Monsanto or Bayer are arbitrating and close to settlement? “That's not us saying that,” noted Gould. And I'll just leave it at that. Again, that’s not Bayer saying that.

Gould said all the trial activity is not about glyphosate. “If anyone is still thinking that this is just a Bayer issue or just a glyphosate issue…. Wake up,” he said.

“Those who don't like what we do, and have been fighting us for over 30 years, got a chink in our armor with IARC on the biggest, and safest pesticide, and they're coming to get us, said Gould speaking from his own perspective.”