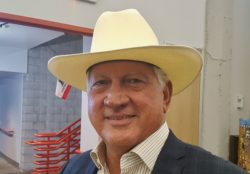 167
SHARES
ShareTweetSend to a friend

Joe Del Bosque is a diversified farmer in western Fresno and Merced counties. At one time, Del Bosque was a farm worker in the field and eventually was able to buy some acreage and expand over time. Now, Del Bosque has his own farm worker employees who are climbing the economic ladder like he did.

“When I see the farm workers on my farm, it's like looking at my ancestors. It's like looking at how hard they worked, working in the fields, picking crops, and so forth, and trying to do the best they can to raise their families and give their children a push-up the way I got it,” Del Bosque said.

“I know that my farm workers are trying to do the same thing. They've got children, they're trying to push them up, and I see that happening because a lot of them have children in college right now. They're getting educated, they're going to go on to become professionals, and I'm very happy about that,” he said.

"There's no doubt. They're definitely climbing the economic ladder. I see on our farm that a lot of our farm workers have bought homes. Even some of the Dreamers, who are now at risk of being deported, have bought homes and they're worried about what's going to happen to them," Del Bosque explained. "Some of them, and other folks in our communities that have invested in small businesses and so forth, have really become members of our society, of our economy, and their efforts are sometimes underappreciated."

Del Bosque spoke of Dreamers that are working with him. “We have one, for instance - he does maintenance for us. He's so skilled with repairing equipment and building things and so forth. He's been with us for a while, and is a very valuable member of our team."