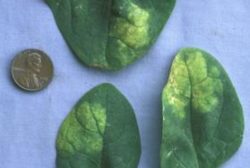 One of the many facets that makes California Agriculture so successful is the hard-working group of farm advisors who assist growers with a multitude of plant and pest issues. Steve Koike, plant pathology farm advisor for UC Division of Agriculture and Natural Resources, Cooperative Extension in Monterey County, noted, “It has been a fairly typical year, and I wouldn't say any particular new disease has been noteworthy, which is good for the growers."

Koike, whose research focuses primarily on understanding disease systems, identifying new diseases and examining new methods of disease control, said growers "don't like to see new diseases come out of our work. The main concern, downey mildew, continues to be challenging for both lettuce and spinach growers."

“We started in the early spring with heavy mildew on both lettuce and spinach crops," explained Koike, "and it's remained pretty heavy on lettuce throughout the spring and early summer here. Spinach downey mildew goes up and down, which is not unusual." he said. "We had some heavy mildew weeks for spinach growers, then we didn't hear anything, then we heard that it had died down, and then ten days ago there was another surge. It's one of those things that is hard to predict because it is variable.”

Since starting his farm advising position in 1989, Koike has been involved in educational programs and applied research in vegetable, fruit and ornamental crop diseases. Because downey mildew can overwinter in perennial crops, its continued occurrence is not too surprising.

“Earlier this year, Jim Correll, my cooperator at University of Arkansas, other leaders in the industry and I finally did confirm race 16, a new biotype of downey mildew. A few years ago, it was only race 12; it is moving target,” he noted.

“Although we have confirmed Race 16 on spinach, we are a little concerned because there are reports of disease on some race 16-resistant varieties.” Koike said.