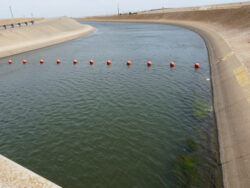 The original initial allocation of 5% water for Federal water users on the Westside of Fresno and Kings Counties has been rescinded. The Bureau of Reclamation has announced that the contract supply of 5% is not available until further notice, which could push tree nut growers into a zero-water supply for 2021.

“It sounds like we still have the 5%, but we don't know when we'll get it,” said Joe Del Bosque, who farms almonds in a Federal water district on the Westside.

“That doesn’t mean we're guaranteed to get it. It just means that it's not going to be available now,“ Del Bosque said.

“And it wasn’t like we didn't have any rain or snow in California this year,” said Ryan Jacobsen, CEO of the Fresno County Farm Bureau.  “Northern California is at 51% of average precipitation for the year statewide average snowpack levels are at 63% of average,” Jacobsen said

It's, instead, just another example of a broken system.

“The unfortunate reality that our farmers here in Fresno County have to deal with now. It is truly a complex issue of what's going on in the Delta. And it's very unfortunate because we're having the full ramifications of it,” Jacobsen said.

“Historically,  going back over a decade ago, this would have been at least some kind of an allocation here, you know, it could have been as high as the 10 20, 30 percentile.  However, because of the restrictions and our inability to get water in years like this year, it truly does reflect the broken system we have in the Delta,” noted Jacobsen.